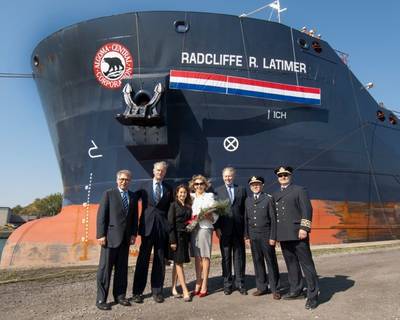 The self-unloading bulk carrier, which transports commodities such as grain, coal, iron ore and gypsum to ports around the Great Lakes, St. Lawrence Seaway and Atlantic Canada will now be called the M/V Radcliffe R. Latimer.

Mr. Latimer, who recently retired from the Algoma Central Corporation board of directors, has an association with the company spanning 46 years and acted as its chairman between 2003-2010.  Mr. Latimer, who lives in Toronto, has had an illustrious business career including CEO positions with CN Rail and TransCanada Pipelines and as a former chairman of Prudential Assurance Canada.

The Algobay was originally constructed in Collingwood Shipyard in 1978.  After nearly 30 years of service in the Algoma Central fleet, the vessel underwent a major refit, including re-engining and a forebody conversion project at Chengxi Shipyard in China and returned to service with the company in 2010.

Greg Wight, CEO of Algoma Central Corporation, said: “Rad has played an important role in the success of Canadian business as well as Algoma Central.  It is a privilege to have his name attached to one of our vessels. The Algobay was specifically chosen for this rededication due to Rad’s role in its recent major refurbishment.”