Aircraft Carrier Hull to be Carried on Dockwise HTV 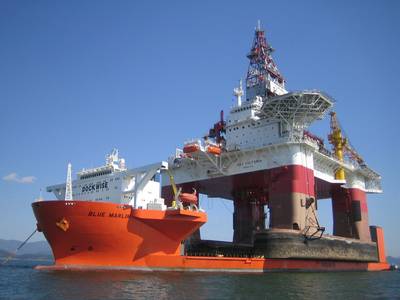 Blue Marlin, the largest semi-submersible HTV available to date, is to load shortly the Navantia manufactured hull (230 meters in length) of the amphibious ALHD flagship Canberra for delivery to the Royal Australian Navy.

A complex technical challenge emerged: the aircraft carrier hull was calculated to protrude 55 meters from the aft end of the Blue Marlin. To meet this challenge Dockwise marine engineers had to work closely with the Navantia team to develop a new grillage and sea-fastening design to safeguard the hull against forces that may be encountered on the voyage.

The ALHD Canberra is the first of two cargoes to commence the 12,000 nautical mile voyage around Cape of Good Hope estimated to be completed in 45 days.

The second, the ALHD Adelaide, will be transported in early 2014. Both hulls are built along the lines of the Juan Carlos 1 of the Spanish Navy by the naval shipyard in Ferrol that is now managed by Navantia.

The Heavy Marine Transport vessel Blue Marlin was built in 2000. She is the largest semi-submersible vessel afloat measuring 224 meters by 63 meters and capable of transporting cargo of up to 76,000 tons.