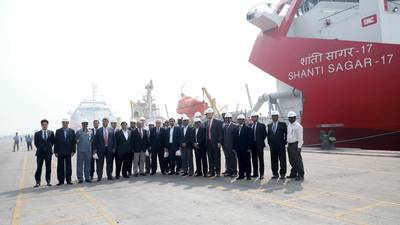 Both dredgers were built by Royal IHC in The Netherlands and recently arrived at Adani’s Hazira Port in Gujarat, India, after their maiden voyage through the Suez Canal. The vessels are the 11th and 12th dredgers supplied by Royal IHC to APSEZ and are among the largest in the Indian fleet of TSHDs.
“[The new dredgers] will substantially increase our capacity for dredging. These vessels are important assets, as they will also support dredging efforts in other Indian ports and facilitate the government’s port-led initiatives.” said APSEZ CEO, Karan Adani, who spoke at the inauguration ceremony along with Dutch Ambassador H.E. Fons Stoelinga; Col. Vinod George, COO Dredging & Reclamation APSEZ; and Kees Derks, Area Director Royal IHC.
“The TSHDs have been registered under the Indian flag and classified under the Indian Register of Shipping,” Karan Adani said.
“These are the first two dredgers from IHC’s standardized Beagle series, with a hopper volume of 8,000m3,” Derks said. “They feature a multipurpose design, which makes them ideal for maintenance and capital dredging with a focus on increased efficiency and uptime. Extensive training in The Netherlands and India is also an important part of this contract, and product support will be provided by IHC’s local branch in Mumbai.”
IHC said it supplied its first dredger in India as early as 1926, and since then has delivered more than 100 dredgers locally.
In 2007, IHC established its service center in Mumbai, where a team of engineers service its dredgers and support the company’s customers throughout India. Recently, IHC extended its service center with a new workshop, with comprehensive machinery capabilities, ready to manufacture, maintain or refurbish parts and components for the offshore, mining and dredging industries.
• Adani Ports • Gujarat • Karan Adani