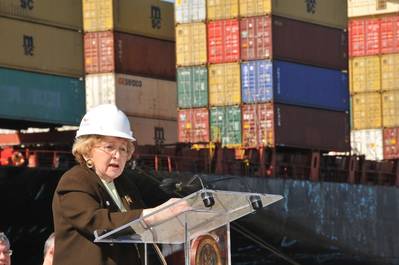 In tribute to the life and many contributions of Helen Delich Bentley, who died on Aug. 6 at age 92, American Association of Port Authorities Executive Vice President and General Counsel Jean Godwin said:

“This past weekend, the port and maritime industry lost one of its most ardent supporters with the passing of Helen Delich Bentley on Aug. 6. Though best remembered by many for her work as a journalist, Federal Maritime Commission chairman and U.S. representative in Congress, we at AAPA acknowledge her strong advocacy for ports, particularly the Port of Baltimore.

In the first renaming of a U.S. port in honor of a living individual, Maryland Gov. Robert L. Erlich, Jr., named the port after Mrs. Bentley at a formal event recognizing the 300th anniversary of the port in 2006.

We at the American Association of Port Authorities are greatly saddened by the loss of Mrs. Bentley, who devoted her life to making a positive, indelible mark on the seaport industry and its issues.  This was her passion and her pride. Her insights on port operations and public policy made her a very effective spokesperson for national port issues as well. Her expertise will be sorely missed in Washington.”