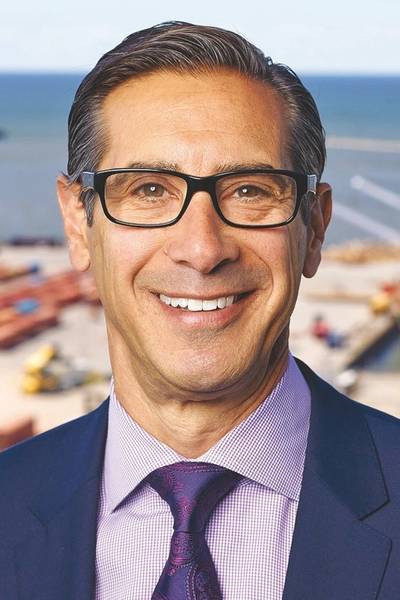 Friedman is Port of Cleveland's President & CEO.
At its 2018 Spring Conference on March 20, the American Association of Port Authorities (AAPA)—the unified and recognized voice of seaports in the Americas—elected William D. Friedman, president and chief executive officer for Northeast Ohio’s Cleveland-Cuyahoga County Port Authority, to serve as the association’s chairman of the board for the 2018-19 activity year that begins in October.
Mr. Friedman is slated to be installed as chairman for a one-year term on the final day of AAPA’s 2018 Annual Convention, set for Oct. 7-10, in Valparaiso, Chile. He will assume the AAPA chairmanship from Steve Cernak, chief executive and port director for Broward County, Fla.’s Port Everglades, who began his one-year term on Oct. 4, 2017.
“With his valuable experience as a port director involved with diversified cargo, his background in real estate development, multimodal transportation and the international supply chain, and his longstanding active engagement with AAPA and our member ports throughout the hemisphere, William Friedman is an outstanding choice for leading our association during the upcoming activity year,” said Kurt Nagle, AAPA’s president and chief executive officer. “Will’s leadership skills will be of enormous value as our member ports work together to address common challenges and legislative priorities.”
Mr. Friedman has worked in port authority management for nearly two decades. Since he assumed its helm in June 2010, the Port of Cleveland has experienced a resurgence in maritime trade and long-sought diversification of cargo types. In 2014, the port launched the Cleveland-Europe Express service, revitalizing shipping via the Great Lakes/St. Lawrence Seaway system and solidifying Cleveland’s position as a leading international hub.
Between 2000 and 2004, Mr. Friedman was CEO of the Ports of Indiana, where he worked to improve financial results, increase cargo volumes and secure more private investment, resulting in a record $1.5 billion annual economic impact statewide. Prior to that, he spent 10 years with the Port of Seattle serving in a variety of management roles, including director of seaport strategic planning, general manager of cargo piers and industrial properties, and senior harbor development planner. Mr. Friedman’s work in Seattle enabled a $600 million expansion of one of the nation’s primary container ports.
Between stints at the Seattle and Cleveland ports, he served as vice president, ports and logistics, for Duke Realty Corp., helping the company expand to key port and inland logistics hubs, including the Port of Savannah in Georgia and the Rickenbacker Global Logistics Park in Columbus, Ohio.
“It’s a great honor to be chosen as chairman-elect of the AAPA, the unified voice of port authorities from all reaches of the Western Hemisphere,” said Mr. Friedman. “Our ports are the linchpins in the global supply chain that generates jobs and economic prosperity for our regions and our nations.  I look forward to working closely with port leaders and stakeholders to strengthen our vital industry.”
In addition to his leadership role at the Port of Cleveland, Mr. Friedman is president of the American Great Lakes Ports Association and serves on numerous industry and civic boards, including AAPA’s Executive Committee, Green Marine, the Northeast Ohio Development Fund, the Northeast Ohio Areawide Coordinating Agency, and the Cuyahoga County Economic Development Commission.
Mr. Friedman holds two degrees from Indiana University -- a bachelor’s in history, and a master’s in public administration, with a concentration in urban and regional planning.
• American Association of Port Authorities • American Great Lakes Ports Association • Americas