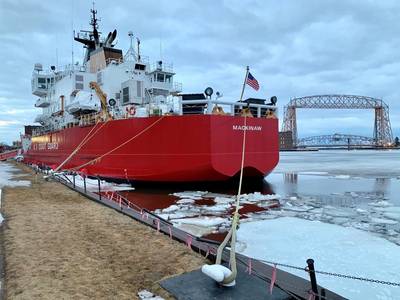 Last night’s arrival of United States Coast Guard Cutters Alder and Mackinaw signaled that the 2019 commercial shipping season is soon to commence for the Port of Duluth-Superior and the entire region.

The Alder and Mackinaw made their way across Lake Superior from Sault Ste. Marie, Michigan, opening a 100-foot lane in the ice that will be widened soon by Canadian Coast Guard Ship Samuel Risley in support of breakout efforts that will also include local tugs from the Great Lakes Towing Company and Heritage Marine. Those efforts will help six vessels berthed in Duluth-Superior get underway downbound with loads in the coming days. Those vessels include (vessel name/winter layup location):

Several vessels are scheduled to pass upbound through the Soo Locks when they open March 25, including:

Recent warming weather, rain and winds have helped reduce Lake Superior ice cover to approximately 65 percent, however, the U.S. Coast Guard reported ice fields in excess of 12 inches thick still remaining on the lake, along with approximately 16 miles of ice cover outside the Duluth entry. Because of these conditions, and the potential for changing ice conditions elsewhere on the lake, shipping operators are expressing caution about early-season sailings. A deliberate start to the season is expected.

Please note, all vessel departure and arrival plans are tentative estimates and subject to change without notice.

In 2018, the St. Lawrence Seaway recorded its best shipping season in a decade, with a nearly 7 percent increase in tonnage over the 2017 season. Gains were recorded in general cargo, including manufactured iron and steel, steel stabs, and containerized trade; dry and liquid bulk cargoes; and an exceptional 37 percent increase in shipments of U.S. grain exports. In the Port of Duluth-Superior, iron ore led the way. The 21.5 million tons of shipped ore was the most transported from Duluth-Superior in a single season since 1995.