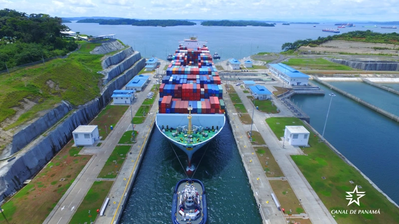 Yesterday, the Panama Canal welcomed its 2,000th Neopanamax vessel through the waterway, demonstrating the route’s continued impact on maritime trade and the industry’s confidence in the safe, reliable and efficient service the Canal provides.

The COSCO Yantian containership completed the milestone transit through the Expanded Canal traveling northbound from the Pacific to the Atlantic Ocean. The vessel measures 351 meters in length and 43 meters in beam, with a total TEU allowance (TTA) of 9,504.

The COSCO Yantian is deployed on the Pacific East Coast 2 (PEX2) service, which operates between Asia and the Caribbean via the Panama Canal.

The 2,000th transit marks another step forward for the Expanded Canal, which has served a number of vessel segments since its opening in June 2016, including containerships, liquefied petroleum gas (LPG) carriers and liquefied natural gas (LNG) carries—a new segment for the waterway.