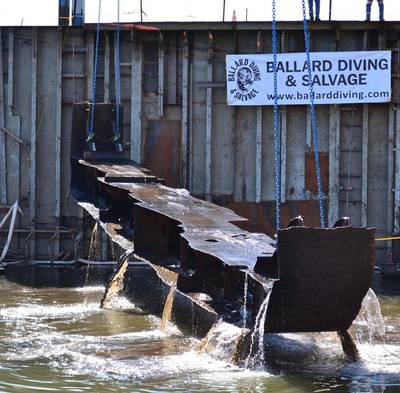 Another section of the vessel rises from the water

The final section of a once proud WWII Liberty Ship was removed from the Columbia River today by Ballard Diving & Salvage under the direction of the United States Coast Guard and unified command consisting of both Washington and Oregon Department of Ecologies. This concludes a massive and carefully engineered effort to prevent more than 32,000 gallons of bunker oil from escaping into the river from the various double-bottom tanks and other holds containing the decades old bunker fuel harboring the sticky black substance.

During the 211-day operation, crews from the prime contractor Ballard Diving & Salvage removed 4.45 million pounds of steel, and another 824,822 pounds of debris, including wire, bricks and oiled sorbent materials and 1.6 million gallons of oil and or otherwise contaminated water.  All recovered materials were taken off-site for proper disposal.

The operation involved stabilizing the vessel and containment of the pollution threat.  When local facilities were unavailable for deconstruction a cofferdam containment was erected.  The Davy could finally be deconstructed in the water.

Snow, near record river levels and high river currents due to abnormally heavy spring runoff and often zero visibility created a challenging environment for the many commercial divers involved in the operation.  BDS is very pleased with the company’s stellar safety record completing a very challenging and dangerous project. The estimated federal cost for the response is approximately $20 million.  The response is funded by monies from the National Oil Spill Liability Trust Fund.