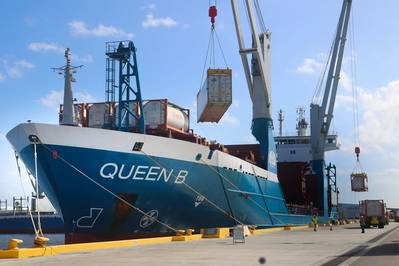 At Port Manatee, cargo is offloaded from World Direct Shipping’s M/V Queen B, which is soon to shift to a new weekly service from Mexico’s Port of Tuxpan, while an additional vessel is deployed between Coatzacoalcos, Mexico, and Port Manatee. (Photo: World Direct)

Ocean carrier World Direct Shipping is doubling its service across the Gulf of Mexico between the state of Veracruz and Central Florida’s Port Manatee.

World Direct Shipping has announced plans to add a weekly sailing to Port Manatee from the Port of Tuxpan, in the north-central portion of Veracruz, to augment the successful service it has operated each week since November 2014 to Port Manatee from Coatzacoalcos, in southern Veracruz. The first sailing from Tuxpan is scheduled for Jan. 12.

Tuxpan is the closest commercial port to Mexico City, situated 180 miles northeast of the Mexican capital, and is proximate to Mexican paper processing centers, which, according to Diaz, should provide opportunities for more paper exports from Port Manatee in addition to greater imports of Mexican fruits, vegetables and juices.

World Direct Shipping, which in April extended its agreement with Port Manatee through the end of 2019, with options for two more years, also announced that it has lengthened its pact with Federal Marine Terminals, which will work both vessels at Port Manatee.