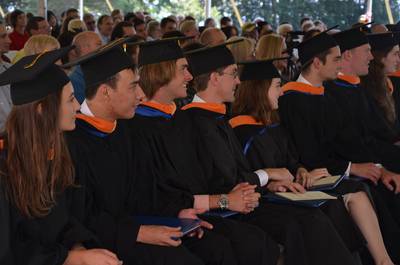 On Saturday June 18, Webb Institute awarded 19 Bachelor of Science degrees at its 120th Commencement Ceremony. Each graduating student received a dual degree in Naval Architecture and Marine Engineering.
Webb’s commencement ceremony, opened with the singing of the National Anthem by the WooFs (Webb Family Singers), and included inspirational remarks from the ceremony’s principal speaker, Donald T. (Boysie) Bollinger, retired chairman and CEO of Louisiana­based Bollinger Shipyards, who was presented with an Honorary Doctorate of Science degree for his exceptional contributions to the marine industry.
In Bollinger’s address to graduates, he expressed his confidence that the graduates were especially well prepared for the challenges that lie ahead.  “I’ve spent my entire career in the marine industry,” Bollinger said.  “I’ve seen it wonderful and I’ve seen it miserable. It’s important you are able to maneuver through those wonderful times and those miserable times, because they will be coming. Whatever career path you think you have in your head now is not where you’re going to end up, because the world is not that clear of a blueprint, and your life is not as perfect as the science you have learned over the past four years.”
Additional remarks were made by Webb’s Chairman of the Board, George Campbell Jr., Ph.D., President R. Keith Michel, Dean Matt Werner, and the Class of 2016’s Student Speaker, Zachary Backas.
Backas’ speech touched on the many triumphs and challenges his class encountered throughout their time at Webb, acknowledging that without the support of one another, completing the program would be impossible. “Thank you, to my class, for all that you’ve done for me. I wouldn’t be standing here without you. With your help I’ve done more than I could have ever done on my own,” Backas expressed.
In addition to the awarding of degrees, several students received additional awards and prizes for outstanding academic achievements in a variety of areas, such as excellence in thesis and mathematics.
Following commencement, Webb’s Class of 2016 will spread out across the country to begin their professional careers in the field of Naval Architecture and Marine Engineering. Notable employers include, Bruce S. Rosenblatt & Associates, LLC, United States Coast Guard, Resolve Engineering Group, Brooklin Boat Yard, and many others.
• Bollinger Shipyards • Louisiana • R. Keith Michel