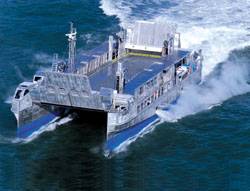 Swedish-based MJP Waterjets has succeeded in combining steering and reversing of two jets simultaneously into a central column operating both jets in parallel by means of a single hydraulic control. This new design of the steering and reversing unit called CSUI has recently been tested on the French landing craft CNIM EDA-R.

The landing craft with its hourglass shaped hull and has two very different operating conditions: Catamaran Mode and Barge Mode and thus called for specific design requirements.The vessel is equipped with four engines and four jets, which are driven by a MJP 650 mixed flow pump. As usual, the intake is adapted and designed to the constraints given by the hull and its application using CFD. The swath type hull with its pronounced hourglass shape results in a narrow waist at the waterline. The section below the waterline is made to an absolute minimum. During the design phase MJP have made use of CFD also to optimize the flow in the bucket to enhance the reversing performance. This is particularly important on a landing craft in order to ensure safe disembarkation from the beach. Sea trials have shown that the vessel is able to operate at the incredible speed of 10 knots in reverse at full load in open seas.

In Catamaran Mode, the centre platform is high above the waterline and the jets are consequently very deep in the water. When the centre platform is lowered into Barge Mode, the jets are in a more common position. The design needs to fulfil the requirements for both operating conditions. Since the jets are placed very deep in the water in Catamaran Mode, inboard hydraulics is being used to avoid the use of external hydraulics several meters below the water surface. Furthermore, the increased wet surface and increased drag caused by external hydraulics is eliminated. Due to the limited space inside the hull, the traditional MJP DRB design could not be used in this case and therefore MJP had to come up with a completely new design with the inboard hydraulics placed above the jets. The new CSUI is based on an old MJP design from the mid 90’s used for a FMV prototype owned by the Swedish Defense organization. Due to the narrow waist of the hull this time two jets in each hull are controlled through centrally located mechanical equipment in between the jets.

Other special features for this project include the engine rpm control, which is, at the same time, used for the platform control hydraulics, as well as the intakes, which are built of GRP in a double mounting to fit the narrow hull shape. The hydraulic system is adapted to extreme ambient temperature requirements with an electrical cooling circuit that can be used for back-up operation of the steering and reversing units. The control system has three complete control stations with a centrally located computer room. The scope of supply also includes the long intermediate carbon drive shafts including supports. Recent tests during the official sea trials showed an excellent result. At full load (270 t) a speed of 17.7 knots was reached and at light load (190 t) a speed of 29.3 knots could be demonstrated. The designer Francois Sebilo of Bureau Mauric comments as follows: “The official speed tests of CNIM EDA-R have been performed to a great satisfaction and we would like to congratulate MJP.“