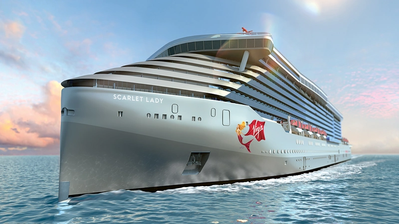 Newly-launched US-based cruise line Virgin Voyages has appointed GAC as its UK agent for the vessel Scarlet Lady on her maiden voyage around the British coast early next year.

Although the vessel is currently under construction in Genoa, Italy, GAC UK is already hard at work to make sure everything is ready for her UK calls.

Virgin Voyages is a global lifestyle brand committed to creating the world’s most irresistible holidays. The brand currently has four ships on order with master shipbuilder Fincantieri and has operations in the US, UK, and Europe, with its inaugural season starting in 2020. Designed to reflect a yacht’s sleek luxury, she will be Adult-by-Design and a sanctuary at sea for the 18+ traveller. Scarlet Lady will sail from Miami to the Caribbean all year round from March 2020.

GAC UK’s commitment to the environment, sustainability and diversity chimed with Virgin’s philosophy and was a key factor in it being selected to provide cruise agency services. The company has implemented a number of initiatives including becoming a member of the World Ocean Council, signing the #Cleanseas pledge, participating in a CO2 consumption reduction program, and introducing workplace initiatives to promote mental health awareness and diversity.

Named to highlight Virgin’s pledge to a future of fostering gender equality, the Scarlet Lady and its ‘Scarlet Squad’ crew aim to help women flourish in industries previously dominated by men. That ambition ethos is shared by GAC UK which recently signed the Women in Maritime pledge to build an employment culture that actively supports and celebrates gender diversity, at all levels.