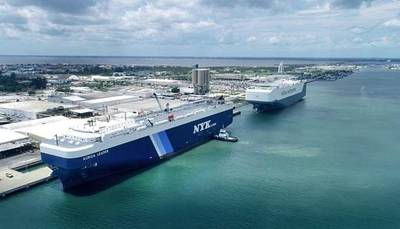 Vehicle imports and exports at Port Canaveral revved up this week with the arrival and departure of the post-Panamax (PPX) shipping vessel Höegh Trotter and another RO/RO vessel, the NYK Auriga Leader. In a first for the port, one vessel discharged new autos while another exported vehicles.

Höegh Autoliners’ massive Höegh Trotter, the third PPX vessel to visit the Port, discharged new autos at the 16-acre AutoPort Canaveral, LLC facility as the nearby Auriga Leader loaded vehicles bound for Central and South America and the Caribbean.

“To have two RO/RO vessels importing and exporting vehicles simultaneously at the Port is an important milestone for our cargo operations and demonstrates our growing ability to accommodate multiple large-capacity vessels,” Port CEO Captain John Murray said. “Central Florida’s continued economic growth is spurring increased RO/RO business for our Port.”

NYK’s Auriga Leader was built in 2008. The vehicle carrier, with a 60,213 GWT, is also 656 feet long and has a 105-foot beam. Most of its cargo of vehicles is heading for ports in Panama and Costa Rica, but the vessel also is making stops in the Dominican Republic, Honduras and Colombia.

Post-Panamax shipping vessels now have access to Port Canaveral since the 2017 completion of a six-month deepening project of the Port’s West Turning Basin. The project provided deeper draft vessel access equal to the authorized channel depth of -44 feet and involved the removal of more than 826,000 cubic yards of dredged material.