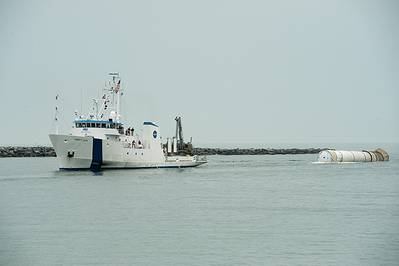 MV Liberty Star was one of two vessels used by NASA to recover the space shuttle’s solid rocket boosters.

U.S. Transportation Secretary Ray LaHood today announced that the Department’s Maritime Administration has secured a new training vessel for the U. S. Merchant Marine Academy in Kings Point, NY.  In an agreement with the National Aeronautics and Space Administration (NASA), the Academy will receive a space shuttle solid rocket booster recovery ship, the MV Liberty Star, which will provide a hands-on learning environment on which midshipmen can train using modern navigational technology, including dynamic positioning and advanced towing techniques.

The agreement, signed today by the Department and NASA, outlines plans for the transfer of the vessel along with the Academy’s future relationship with NASA.  MARAD will relocate the vessel from Cape Canaveral, Florida, to Kings Point, New York, this fall.  The Maritime Administration is planning shipyard work to increase onboard berthing and fully convert the MV Liberty Star to a training vessel after its arrival at the Academy.  “Securing this modern vessel supports the goals outlined in the Academy’s new strategic plan and will ensure our midshipmen  get the top-notch education and training they need to compete and win in a competitive global marketplace,” said Secretary LaHood.

“This past April, when we toured the Academy, I asked for three things and today we are batting 3 for 3: we have a new superintendent in place, we were able to increase capital funding in the senate appropriations bill and now we have a new training vessel on its way,” said Senator Charles E. Schumer.  “We are righting this ship not only for the midshipmen currently attending, but for the generations of students who will come. The Merchant Marine Academy is getting back on course and I commend Secretary LaHood for his hard work, hearing our call and delivering promptly.”

Like all other Maritime Administration reserve ships, the Academy training ship will remain on call for occasional use – in this case NASA missions – allowing midshipmen to get at-sea experience with commercial crews.
“This agreement is a win-win for both Kings Point and NASA,” said Maritime Administrator David Matsuda. “The ship's high tech equipment and real world capabilities closely mirror what graduates will see entering the maritime workforce.”

“The acquisition of this state-of-the-art training vessel will help us provide the best education and hands-on experience for our future maritime leaders,” said Superintendent of the U.S. Merchant Marine Academy, Rear Admiral James A. Helis.  “There is nothing like real life experience to facilitate the learning process.”

Although midshipmen obtain the sea time needed for their U.S. Coast Guard license aboard commercial merchant ships during their “sea year,” the new training vessel will familiarize midshipmen with shipboard equipment and characteristics, and basic ship handling.

The Obama Administration has made a comprehensive effort to renew facilities and teaching infrastructure at our nation’s maritime academy.  Since FY 2009, the Obama Administration has requested and Congress has appropriated more than $300 million for the Academy, which includes $239 million for operations and $61 million for capital improvements – including $23 million last year, the most funding ever secured for physical improvements at the Academy. The vessel will be a major component of a renewed waterfront at the Academy that includes a new pier.

Background of the MV Liberty Star
The MV Liberty Star was one of two vessels used by NASA to recover the space shuttle’s solid rocket boosters following the launch of a space shuttle mission.  Propelled by two combined 2,900 horsepower diesel engines, the 176-foot long MV Liberty Star has a 6,000 mile range and a maximum speed of 15 knots.  The ship’s controllable pitch propellers and auxiliary water jet thruster, combined with modern joy-stick dynamic positioning capability provide midshipmen a highly maneuverable training platform.  The vessel has a 7,500 pound deck crane, which is an ideal tool for providing a basic understanding of modern cargo operations. It also has a fast rescue boat, which can provide midshipman critical experience in general launch operations.   In addition, the vessel’s double towing winch, substantial towing H bitts, and a massive towing fairlead add significant new towing training capabilities to the Academy’s portfolio.