Tough Recovery Ahead for Some Box Trades; More Uncertainty in Others 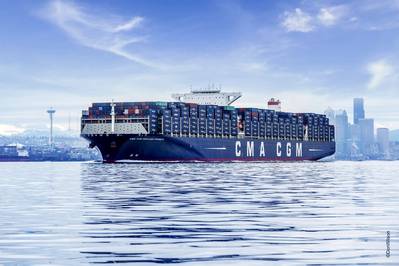 Drewry says that recovering demand recovery in the North America-East Coast South America box trades provides encouragement, but local political conditions bear watching. Elsewhere, reports that Maersk and MSC are reviewing their Iran operations underpins broader political uncertainties that could get in the way.
Maritime Research Consultancy Drewry is reporting that the headhaul East Coast South America to North America trade fell by 1% in the first quarter 2018 to 137,000 teu. Brazil owns as much 85% of that market where the slowdown was mostly a function of waning US demand for major commodities. Nevertheless, wood shipments improved sharply to offset lower volumes for other cargoes.
Drewry, which uses Datamar for its container traffic data reports, also reported that trade was more buoyant in the opposite direction as southbound container volumes rose by 2% year-on-year in 1Q18. According to Drewry, “Much of the impetus occurred in January when annual growth touched 20%, before softening in February and declining in March.” Brazil also dominates this route, with U.S. customs data derived from Global Trade Information Services (GTIS) showing a significant Q1 increase for Brazilian box shipments of fuels, precious metals and organic chemicals. Nevertheless, says Drewry, mixed economic signals make the future for this trade corridor “hard to predict.”
Brazil’s downgraded credit rating (from BB to BB-minus) takes it deeper into speculative junk territory but, at the same time, the IMF’s view of Brazil’s GDP outlook is somewhat brighter for both this year and next. IMF expects the country’s economy to grow by 2.3% in 2018 and by 2.5% in 2019. On this unsteady platform, Brazil has managed to attract less risk-averse foreign investment and the recovery in commodity prices has given the local economy a much needed boost. Separately, an October general election brings renewed political uncertainties, since a change in political leadership could alter course for the country’s economic policies, as well.
Elsewhere in this corridor, the Argentinian economy, slowed by a drought that impacted agricultural production, also saw economic reforms fall short on delivering quick results. Nevertheless, and with more benign weather conditions and less currency volatility, says Drewry, “there is every reason to expect more from Argentina’s container imports and exports soon.”
The four major players operating in the North America-ECSA trade deploy a total of 30 ships of approximately 6,000 teu in size, with another service using nine vessels of 3,400 teu. As of April 2018, the four major players in the trade were MSC (30%), Hamburg Sud/Maersk Line (27%), Hapag-Lloyd (23%) and CMA CGM (15%). Based on forward schedules Drewry anticipates that capacity will rise in May and June as a consequence of an extra loader and ship upgrades on the MSC/Hapag-Lloyd/ONE - GS1/US Gulf/ANG service, taking the average ship size on the loop from 6,100 teu to 6,230 teu.
Drewry estimates that ships on the southbound voyage are not even half full while on the northbound leg ship utilization has struggled to get much above 60% in the past year or so. According to the latest Drewry analysis, “With such poor utilization, North America-ECSA spot market freight rates tend to stay in narrow, low band. Drewry’s Container Freight Rate Insight shows that benchmark spot rates from Santos to New York were about $2,600/40ft in April, where they have resided for most of this year, while New York to Santos spot rates have stuck close to $1,200/40ft.”
It’s likely to be a tough grind, but Drewry expects demand in this trade to see gradual improvement during this year. Given the over supplied situation there is unlikely to be any significant change to freight rates.
According to Reuters, the world's top two container shipping groups Maersk Line and MSC are reviewing their Iran operations after the United States withdrawal from the international nuclear agreement with Tehran. The 2015 agreement lifted sanctions on Tehran in exchange for limits to its nuclear program.
U.S. President Donald Trump has now instructed his administration to re-impose U.S. sanctions after a winding down period. “MSC is reviewing its services, operations and business relationships to understand if any are impacted and will comply with the timetable set out by the U.S. government,” the private Swiss-headquartered group said in a statement on Friday. According to one Reuters source, MSC had already stopped taking bookings for certain cargoes that would be impacted by the sanctions program.
Separately, Maersk Line has also stopped acceptance of the specific cargoes listed by the U.S. Treasury this week. “Our presence in Iran is limited. We will monitor the developments to assess any impact on our activities,” Maersk said.
Before international sanctions were lifted in 2016, Iran struggled because its import and export commerce depend heavily on seaborne shipments. Now, its port operators and shipping operators will also be blacklisted by Washington. And, says Reuters, the U.S. will separately re-impose sanctions on the provision of insurance and reinsurance, which had been another challenge for Iran in the past. Lloyd's of London, among others, are reviewing the implications for the broader insurance markets.
Hence, a world container market that is showing signs of life still has many uncertainties facing it, as the midpoint of 2018 approaches.
• Argentina • Brazil • CMA CGM