The Tipping Point: U.S. Exports more Oil than it Imports 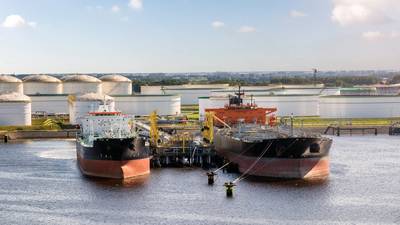 The United States last week exported more crude oil and fuel than it imported for the first time on record, underscoring the nation's growing influence as a supplier of oil to the world.

Exports of crude surged in the week to Nov. 30 to more than 3.2 million barrels per day, the U.S. Energy Information Administration said on Thursday.

When adding in all imports and exports of crude and refined products, for the week the U.S. exported a net 211,000 bpd – the first time that has happened, according to U.S. Energy Department figures dating to 1973.

The United States historically has been a heavy importer of crude oil in part due to a four-decade ban on crude exports that was lifted in late 2015 by then-President Barack Obama.

Petroleum exports until recently were dominated by products like gasoline and diesel, but that has changed since the U.S. shale revolution that has sped up drilling and extraction of oil, helping boost overall U.S. production to a record 11.7 million bpd.

The data comes on the same day that the Organization of the Petroleum Exporting Countries adjourned a meeting without announcing a supply-cut agreement as it grapples with sinking prices due in part to the surge in U.S. output that has upended the global supply equation.

"So when does the U.S. send a delegate to OPEC meetings?" said Kyle Cooper, consultant at ION Energy in Houston. "It's really quite amazing. I do think that will occur more and more often in coming years."

U.S. oil prices have sagged since hitting a four-year high near $76 a barrel in October. That wass in part due to concerns about oversupply coming to the fore again as U.S. production surged in tandem with increased output from Saudi Arabia and Russia. The three countries are the world's largest producers of oil.

That has created a dilemma for Saudi-led OPEC, which wants to maintain higher prices but avoid ceding more market share to shale producers.

"It seems EIA has a habit of sending bad news to OPEC during its Vienna meetings. In the past, it was been surging U.S. production numbers. But this time was truly remarkable and historic showing data for net crude imports as -211,000 bpd," said Joe McMonigle, analyst at Hedgeye in Washington.

For the week, the United States also posted net exports of 4.2 million bpd of products like gasoline and diesel.

The weekly figures are subject to wide fluctations, however, so the sudden shift may be a temporary occurrence. Andrew Lipow, president of Lipow Oil Associates in Houston, said he was not surprised this happened in the winter, a seasonally slow period for domestic gasoline demand.

U.S. oil prices were little changed after the EIA data. The market has been lower all day due to concern that planned OPEC production cuts will be smaller than originally anticipated.