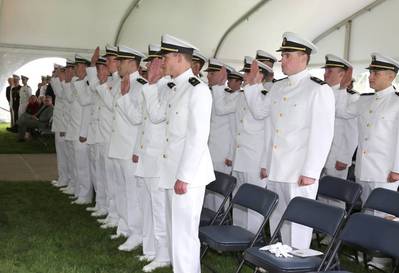 Last week, 24 midshipmen received commissions to become ensigns in the U.S. Navy at SUNY Maritime College.
More than half of the students were selected for duty as strategic sealift officers, who provide logistical and other forms of support in times of military deployment. Many of them will go on to work for Military Sealift Command; others were selected for surface warfare or submarines and one was selected to be a student naval aviator.
Admiral Phil Davidson, commander of U.S. Fleet Forces, addressed the students and their families at the ceremony: “We are the people who shoot missiles and satellites out of space. We are the people that put 70 aircraft on a 4.5-acre floating airfield. Our sailors drive nuclear submarines beneath the North Pole. And, we are the only force that can refuel and resupply continuously underway at sea,” Davidson said. “This is the fleet that you are joining. The expectations are very high.”
The college’s valedictorian and salutatorian, electrical engineering major Richard Schaefer and mechanical engineering major Matthew Kearney, respectively, received their commissions during the ceremony.
After reciting the oath of office, the students – who immediately became junior officers – received their new shoulder boards and covers, as well as their first salutes, many from members of their families.
“The challenges ahead of you are enormous,” Davidson said. “The Constitution alone should be enough, but your superior officers, your subordinates and your peers all have high expectations as well. Their success becomes your success. That is the essence of being a mariner, an officer and a professional in our service. This is the difference between your life up till now and the life you’re about to embark on.”
“Welcome to the fleet,” Davidson added.
SUNY Maritime’s spring commencement exercises followed the next day, when more than 220 students received their degrees.
• Military Sealift Command • Phil Davidson • SUNY Maritime College