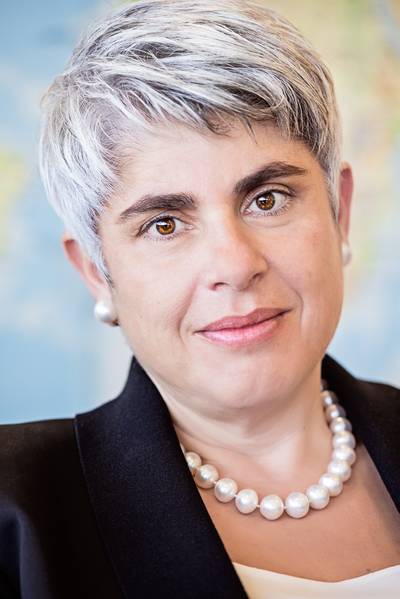 SUNY Maritime College will recognize one of the most prominent women in the maritime industry with an honorary doctorate during its May 2017 commencement.

Angeliki Frangou, chairman and CEO of the Navios Group, will receive an honorary Doctor of Science degree and deliver the commencement address to the college’s approximately 300 graduates on May 5 in St. Mary’s Pentagon in the college’s historic Fort Schuyler.
“Ms. Frangou is a successful businesswoman and leader who has taken Navios to the heights of the shipping industry,” said Rear Adm. Michael Alfultis, president of SUNY Maritime. “She is an outstanding model for our graduates. The Maritime College community is proud to award her with an honorary doctorate.”
The honorary doctorate is the highest form of recognition offered by the State University of New York system. It is awarded only to people deemed to be of “exceptional distinction.”
Navios Group is a global maritime consortium that controls 170 vessels as well as a ports and terminals in South America. Frangou is a fifth-generation ship owner with a reputation as one of the most innovative businesspeople in the industry. She ran a publicly traded company and raised more than $200 million to merge it with Navios in 2004. In that merger, she became the Navios Group’s chairman and CEO.
Under her leadership, Navios’ fleet capacity has increased more than 870 percent and the company controls 170 vessels, including tankers, dry bulkers and container ships. It has built a gold-standard name and reputation within the capital markets since she took over leadership of the organization.
Frangou is an active supporter of SUNY Maritime, contributing to student scholarships and speaking at various college events including the Women on the Water conference and the Admiral’s Scholarship Dinner.
She is involved in multiple boards and other organizations, including the United Kingdom Mutual Steam Ship Assurance Association (Bermuda) Limited, the China Classification Society Mediterranean Committee, the Hellenic & Black Sea Committee of Bureau Veritas, and the Union of Greek Shipowners.
Frangou holds a bachelor’s degree in Mechanical Engineering from Fairleigh Dickinson University and a master’s, also in Mechanical Engineering, from Columbia University.
• Angeliki Frangou • Columbia University • Fort Schuyler