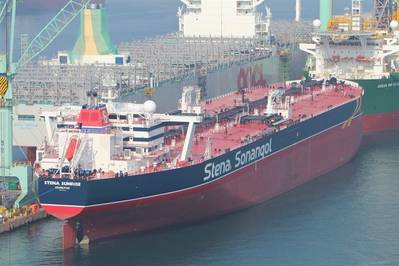 The last in a series of 7, the Stena Bulk tankship was named 'Stena Sunrise' at the Samsung Heavy Industries' shipyard.

The Stena Sunrise is a third generation, fuel-efficient Suezmax and, like the other tankers in the series, will be employed on the spot market via Stena Sonangol Suezmax Pool.

This ship is the last vessel in a series built at SHI and ordered at the beginning of 2010.  Known as “The seven sisters”, with each representing an investment of just under SEK 500 million.

Together with SHI, Stena Teknik has been responsible for the development of the new ship model, where the focus has been on energy efficiency. The vessel’s technical equipment and design mean that fuel consumption can be reduced by up to 10-15 percent compared with standard tonnage. As a result, fuel consumption can be reduced by 4-6 thousand litres per day thus saving US$ 3-4,000/day.

“Like Stena Teknik, we are very satisfied with the collaboration with the Samsung shipyard, which has characterised both the development and production of this tanker series. Besides the generally good quality delivered by the shipyard, we have together achieved our fuel efficiency target, which was the single most important objective”,  Erik Hånell, President and CEO of Stena Bulk, commented.

International guests gathered together with representatives of SHI and the Stena Group at the shipyard in Geoje to attend the naming ceremony. The Stena Sunrise’s godmother was Inge Widjaja, married to Franky O Widjaja, owner of Indonesian Golden Agri (GAR).