CMA CGM to Strengthen its Presence in South America 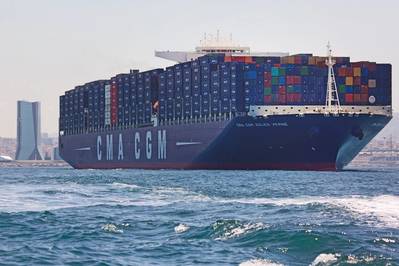 The CMA CGM group, a world leader in container shipping, announces the reshuffling of two services in addition to the MERCOSUL buyout project and pursues its development strategy in South America, with SAFRAN and SIRIUS.

These two services between South America and Europe are: SAFRAN for Northern Europe and SIRIUS for the Mediterranean.
SAFRAN will be starting in Rotterdam on September 27, 2017.  With this service, the CMA CGM Group offers the fastest service on the trade to its customers. Calling at the port of Pecem also allows the CMA CGM Group to offer a new option to those already existing in northern Brazil during the fruit season.
The service will call at the ports of: Rotterdam / London / Hamburg / Antwerp / Le Havre / Algeciras / Santos / Paranagua / Buenos Aires / Montevideo / Itapoa / Paranagua / Santos / Pecem / Tangier
SIRIUS will be starting in Malta on October 6, 2017. This new service connects ports on the East Coast of South America via its hub in Malta to ports in the eastern Mediterranean, North Africa in the Adriatic Sea or the Indian subcontinent. The CMA CGM Group also improves its port coverage with the addition of the port of Algeciras, giving a fast transit time from Asian ports via transhipment.
The service will call at the ports of: Malta / Genoa / Barcelona / Valencia / Algeciras / Salvador / Itaguai / Santos / Itapoa / Buenos Aires / Rio Grande / Itajai / Itapoa / Santos / Itaguai / Tanger / Algeciras
The CMA CGM Group will supply 3 of the 8 ships in Sirius. By becoming a ship operator in this trade, the CMA CGM Group is increasing its capacity and strengthening its presence on the East Coast of South America.
• Adriatic Sea • Brazil • CMA CGM Group