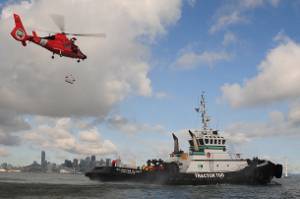 Starlight Marine Services, a full service marine transportation provider and subsidiary of Harley Marine Services, has collaborated with the United States Coast Guard to conduct on the water rescue training.  The first training was conducted on January 15 and the more recent was on April 1.  This training marked the first time the air station trained with members from the tug and barge industry.

During the April training, two Coast Guard MH-65 Dolphin class helicopters were on scene from Air Station San Francisco to conduct hoist training with the crew from Starlight Marine’s Millennium Falcon.  The training included numerous rescue training attempts while the tug was underway.  This requires the use of a trail line and pristine communication between the vessel and helicopter.  A combination of both litters and rescue baskets were used during the training.  A rescue swimmer was also lowered to the tug during the training.