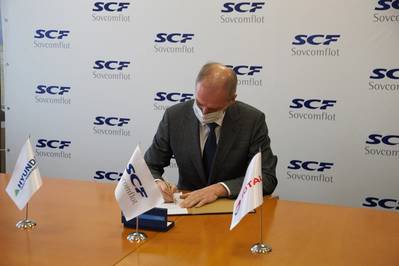 PAO Sovcomflot (SCF Group) and Total have concluded a time charter agreement for up to seven years for a newbuild 174,000-cubic-meter-capacity liquefied natural gas (LNG) carrier, scheduled to be delivered Q3 2023 and to be owned and operated by SCF, with options for up to two additional vessels.

The new vessel will be the latest in a series of SCF’s new-generation conventional Atlanticmax LNG carriers, with three sister ships already in operation: SCF La Perouse, SCF Barents and SCF Timmerman.

The vessel will be fitted with an X-DF propulsion system, operated by a slow-speed diesel engine with a direct drive to the propellers, which will enable a substantial reduction in the vessel’s fuel consumption when compared with previous generations of LNG carriers.

The new carrier will also be fitted with a hull air lubrication system which, combined with  two shaft power generators with frequency-to-current converters, is expected to deliver a further significant decrease in fuel consumption and greenhouse gas emissions. Another environmental feature of this series of new-generation vessels is a partial re-liquefaction system, which allows cargo boil-off gas to be returned to the tanks.