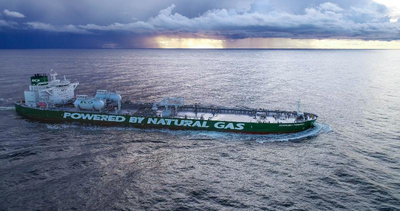 Sovcomflot is steadily introducing LNG as a fuel for large-capacity cargo shipping in the Arctic. In October 2018, Lomonosov Prospect crossed the NSR westbound, successfully testing the operation of the ship engines and controls of the fuel systems using LNG during the voyage. In 2019, Sovcomflot had three of his LNG-fueled tankers cross the NSR eastbound (Korolev Prospect in September 2019, Lomonosov Prospect and Mendeleev Prospect in October 2019), and one such tanker westbound.

Currently, Sovcomflot has six LNG-fueled oil tankers in operation, all delivered in 2018-2019. The lead ship of the series is Gagarin Prospect. Each 113,000-dwt tanker is assigned an ice class of 1A/1B, with a length of 250 meters and a breadth of 44 meters.