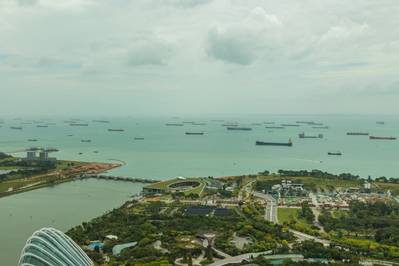 Singapore marine fuel sales climbed to a four-month high of 4.283 million tonnes in May, up 1.2 percent from the previous month and 2.5 percent higher compared with a year ago, data from the Maritime and Port Authority of Singapore (MPA) showed on Wednesday.

The strong volumes sold in May were largely in line with industry expectations and come despite sharply higher bunker fuel prices due to rising crude oil prices and shortages of finished grade bunker fuel oil during the month.

The cost of 380-centistoke (cst) fuel oil cargoes, the mainstay bunker fuel for large vessels, in May averaged $433 a tonnes, 13 percent higher from the $385 per tonne average in April.

Some of the world's largest container shipping companies in May introduced surcharges to customers to offset rising bunker fuel costs.

The number of vessels that called at Singapore for bunkers, the world's largest marine refueling hub, dropped by 8 percent from last year to a three-month low of 3,237 ships, MPA data showed.

However, vessels calling at Singapore for bunkers loaded higher quantities of fuel with each ship taking on an average 1,320 tonnes of fuel in May, a three-month high and above the 2017 average of 1,240 tonnes.

Since the start of the year, Singapore marine fuel sales totaled a record 21.427 million tonnes this year, up 2 percent from the previous record of 21.084 million tonnes sold in the same period a year earlier.

However, sales of the less-expensive high-viscosity 500-cst marine fuel passed the 1-million-tonne mark for the first time ever, climbing to a record high of 1.01 million tonnes.

The 500-cst sales were up 18 percent from last year and 9 percent higher from April.

Sales of Emission Control Areas-compliant low-sulfur marine gas oil slipped to 110,000 tonnes in May, up 7 percent from last year, but 13 percent lower from April.

Sales of the lower-viscosity 180-cst fuel snapped three straight months of declines and rebounded from a 2018 low of 23,000 tonnes seen in April, climbing to 31,000 tonnes in May.