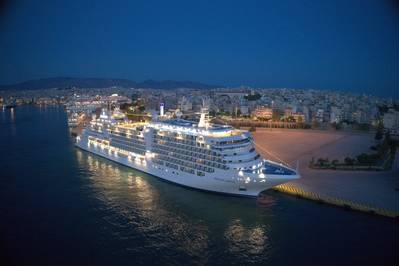 Silver Moon, Silversea Cruises' newest ship in its "ultra-luxury" fleet, was christened Thursday in Athens, Greece. The naming ceremony was held in the port of Piraeus.

At 40,700 gross tons and with a maximum capacity of 596 guests, Silver Moon is the cruise line’s second Muse-class ship.

Constructed by Fincantieri at its Ancona shipyard, Silver Moon is an evolution of her sister ship Silver Muse, Silversea Cruises said.

At the ceremony, Reverend Father Ioannis Patsis, Vice President of Caritas Hellas, blessed the vessel, before the ship’s Godmother, Gaia Gaja – of the renowned Italian Gaja Winery – broke a bottle of champagne on the ship’s bow.

Guests viewed the event on screens throughout the ship and members of Silversea’s extended family streamed the broadcast online, as Silver Moon officially became the ninth ship in the ultra-luxury cruise line’s fleet.

"Witnessing the official naming of Silver Moon—the first of Silversea’s christenings as part of Royal Caribbean Group—was a very proud moment indeed,” says Richard D. Fain, Royal Caribbean Group, Chairman and CEO. “I commend Silversea’s leadership team, Captain Georgiev and Silver Moon’s crew, the team of Fincantieri, and everyone involved in the ship’s launch for their tireless efforts in bringing this long-awaited milestone to fruition.”

Roberto Martinoli, President and CEO of Silversea Cruises said: "As the first ultra-luxury cruise ship to set sail this year, Silver Moon leads the way in the return of ultra-luxury cruising. She represents our industry’s strength and resilience."

Silversea said it was leading the way in the global restart of ultra-luxury cruising. The first of two ships in Silversea’s fleet to have returned to service, Silver Moon is joined by new ship Silver Origin—now sailing on all-new itineraries in the Galapagos Islands, the company said.

Silver Muse will become the first ultra-luxury ship to set sail for Alaska when she departs for the region’s glaciers from Seattle on July 29. Beginning July 30, Silver Shadow will undertake all-Icelandic circumnavigations out of Reykjavik, the company said.

Additional Silversea ships are expected to set sail in the near future and Silversea’s third new ship since 2020, Silver Dawn, is scheduled to depart on her maiden voyage in November 2021.

"These certifications highlight Silversea’s commitment to safeguarding the health and well-being of guests, crew, and the communities it visits as part of the company’s healthy return to service," the company said.

Port of Oakland's Beef Exports on the Rise