Shipping and Sanctions: What You Need to Know 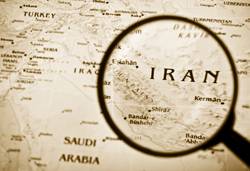 (As published in the August 2012 edition of Maritime Reporter & Engineering News - www.marinelink.com)