The end of the 2019 saw some unprecedented funding measure pass through Congress and signed into law by President Trump.  The Gulf and East Coast have continued to receive significant funding to help deepen and widen navigational channels and gateways.  One of the projects passed into law included the Gulf Coast Regional Demonstration Project.  Some of the ports receiving funding and underway include Mobile, Baltimore, Houston, Port Everglades and Norfolk.  All these projects funded by Congress draw a direct correlation to the expanded Panama Canal.

The newly expanded Panama Canal now allows ships three times the size of what they were in 2016 to transit though its waterways.  And all those Neo-Panamax ships are destined for ports along the east and gulf coasts.

Let’s look at some of the ports and projects:

The Gulf Coast Demonstration Project
In December 2019, the FY2020 Energy and Water Development appropriations bill was signed into law as part of H.R.1865 and included a new regional dredge demonstration program for the central Gulf Coast.  The program, administered by the Corps, was created to explore innovative ways of executing dredging in a logical and sequenced manner to seek efficiencies and cost savings and minimize disruptions to critical construction and maintenance dredging requirements across the nation.

On February 10, 2020 the U.S. Army Corps of Engineers allocated $274,300,000 for the Port of Mobile in its FY2020 Work Plan, officially providing the resources to dredge Alabama’s Port of Mobile.  The funding – which accounts for the full federal share of the project cost – will initiate and complete construction of the deepening and widening of the navigation channel.  Following the required preliminary steps, construction is expected to begin later this year.  In addition, $85.35 million was allocated in the FY20 work plan to initiate construction of deepening the Mississippi River Ship Channel, Gulf to Baton Rouge (Louisiana) to 50 feet.

The Port of Baltimore, Maryland
The U.S. Army Corps of Engineers, Baltimore District, announced in February that Great Lakes Dredge & Dock Company began dredging approximately 5.5 million cubic yards of material from five channels and the York Spit; all of which are associated with the Baltimore Harbor.

Commenting on the project, U.S. Army Corps of Engineers Colonel John Litz, Baltimore District Commander said: “Baltimore Harbor channels rely on maintenance dredging to serve and strengthen the region and the nation, energize the economy, and reduce navigation safety risks.” The amount of material being removed would cover the field at M&T Bank Stadium, goalpost to goalpost, to a height of nearly 2,600 feet, or high enough to stack more than six Baltimore World Trade Centers. “Many diverse commodities import and export from the Port of Baltimore on a daily basis, such as specialized cargo and containers that broke records in 2019,” finished Colonel Litz.

In the Corps 2020 work plan, Baltimore also received a New Start designation for the Seagirt Loop Canal to initiate a feasibility study.

A Convoy of Great Lakes Dredge and Dock dredges. Photo: Great Lakes Dredge and Dock
Port of Houston, Texas
The Port of Houston received over $70 million this year through the Army Corps of Engineers operation and maintenance work plan.  The funding will be used for ordinary maintenance dredging and to help prepare for an eventual $1 billion deepening and widening project for the Houston Ship Channel.  Plans include widening the Galveston portion of the Houston Ship Channel from its exiting width of 530-feet to a width of 700 feet.  To this end, the Port of Houston also received funding from the Army Corps’ Investigations account to initiate pre-construction, engineering and design plans for widening and deepening the channel.

In February, the Coalition for a Fair and Open Port presented the Port of Houston Commission with a proposal to use port-issued bonds and an industry paid fee structure to fund $500 million of the deepening and widening.  According to the Coalition, the bonding and fee proposal would cover the industry’s upfront costs.  However, the fees to ocean carriers could not be collected until the deepening and widening project was completed.  The Coalition comprises energy companies.

The Port Everglades Navigation Improvements Project is currently received a signed Chief of Engineers Report from the U.S. Army Corps of Engineers in 2015 and U.S. Congressional authorization through the Water Infrastructure Improvements of the Nation (WIIN) Act in December 2016.

Port Everglades intends to deepen the main navigational channels from 42 feet to 48 feet (plus 1-foot required and another 1-foot allowable over-depth for a total of 50 feet), and to deepen and widen the entrance channel and parts of the Intracoastal Waterway so that larger ships can transit and pass safely by docked cruise ships.

The New Start funding will be used to build a new facility for the U.S. Coast Guard Station Fort Lauderdale so the Intracoastal Waterway can be widened by 250 feet at a choke point where large Neo-Panamax ships currently experience operating restrictions that affect the vessels’ ability to transit. The Coast Guard Station reconfiguration is the first phase of the larger dredging project.

In October, the Port of Virginia executed a contract with New Jersey-based Weeks Marine to begin the deepening of the western side of Thimble Shoal Channel.  The work includes dredging the shipping channels to 55 feet — with deeper ocean approaches — and widening them up to 1,400 feet in specific areas.

The dredging project will enhance accessibility to the Port of Virginia while providing significant benefits to the national economy and national security.  The deepening effort got under way in 2015, when the U.S. Army Corps of Engineers and the port agreed to share the cost of evaluating the benefits of dredging the Norfolk Harbor to a depth beyond 50 feet.

Weeks is utilizing the clam shell bucket dredge 551 with a huge scooping capacity.  Weeks’s clam shell dredge 506 with its new Liebherr crane and bucket assembly arrived at the site a couple of weeks later.  This Spring, Weeks will enlist its new trailing suction hopper dredge the TSHD MAGDALEN on the project to clear out the middle of the channel.

Weeks will be digging down to about 56 feet. The port will also widen the channel to 1,400 feet to allow for two-way ship traffic. Currently, the channel allows just one large ship transiting at a time.

On the inner harbor, the U.S. Army Corps of Engineers, Norfolk District announced in January that it will manage the operations and maintenance project as part of an effort to remove shoaling, allowing safe and unrestricted navigation for the largest commercial and military vessels transiting into and out of the Port of Virginia. Officials expect Cottrell's dredging operations to take about five months to complete the work.
The contract, awarded in August to the Chesapeake-based Cottrell, permits the dredging of 1.1 million cubic yards of sediment from the federal channel. Cottrell will pump dredge material by pipeline to Craney Island Dredged Material Management Area in Portsmouth.  Cottrell is dredging to a depth of 52 feet below mean lower low water, a formula based on the lowest tide’s average height measured over a 19-year period. 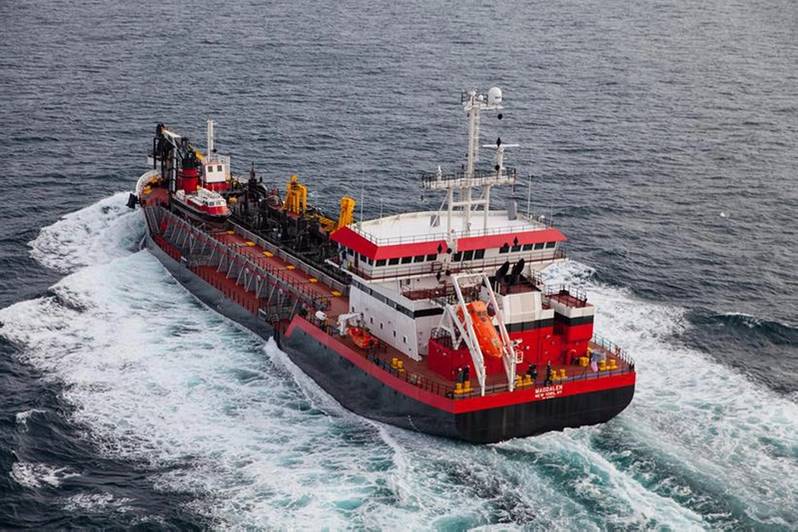