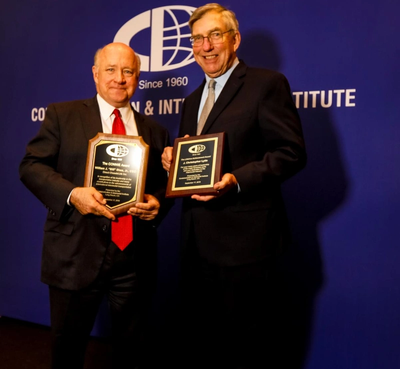 Some 300 transportation leaders packed a hotel ballroom Tuesday as the Containerization and Intermodal Institute presented its Connie Award to William J. "Bill" Shea, CEO of Direct ChassisLink Inc. (DCLI). J. Christopher Lytle, recently retired Executive Director of the Port of Oakland and former head of the Port of Long Beach, was given the group's Lifetime Achievement Award. The gala event was held at the Renaissance Hotel in Long Beach, CA.

In his presentation remarks, Michal J. DiVirgilio, CII President, noted that Bill Shea is an industry veteran with more than 30 years of experience and is known as an innovator especially as it relates to the evolution of chassis leasing. "He oversaw the creation of DCLI when it was the chassis leasing division of Maersk. And, especially important in this market, Bill Shea is the visionary who created the Pool of Pools in 2015, which is the grey daily-use chassis pool that operates in the ports of Los Angeles and Long Beach," said Mr. DiVirgilio. "His progressive approach to the chassis challenges has had a dramatic effect on the way these ports, the two largest harbors in North America, do business."

Mr. Shea continued: "In the past 10 years, Ocean Carriers have joined Alliances to share assets - but remain fierce competitors. Likewise, equipment providers have collaborated in pooling arrangements in certain markets like Los Angeles and Long Beach, while offering proprietary products and services in other markets to meet unique customer requirements and demand. There is no One Size Fits All Model for equipment pooling in the US, and the free market environment is the best avenue to develop innovative solutions linking equipment provisioning models with global supply chain networks."

Presently, Mr. Shea serves on the Board of Directors of DCLI and Blume Global and on the Board of the International Institute of Container Lessors. Mr. Shea has a long history serving charitable organizations and has founded three charity wine auctions that have raised over $40 million for children's causes. He also sits on the San Francisco Family House board, an 80-unit facility that houses families whose children are undergoing treatment for life-threatening illnesses at
University of California, San Francisco Hospital.

Mr. DiVirgilio noted: "In fact, I'd like to mention that when CII first considered a west coast Connie Award more than 10 years ago, it was Mr. Lytle, the then-Chief Operating Officer at the Port of Long Beach, who was instrumental in bringing the event here and launching our strong, decade-long partnership. "This is a special honor that is our pleasure to acknowledge." Richard Steinke, a previous Connie recipient and now the Ports Practice Leader at Moffatt & Nichol, presented Mr. Lytle's award.

Prior to assuming the position at the Port of Oakland, Mr. Lytle served as the Executive Director at the Port of Long Beach. Before joining the Port, Mr. Lytle served as Vice President of West Coast Operations for the French-based shipping line CMA CGM, which has significant marine and terminal operations at the ports of Long Beach, Oakland and Seattle. He has held various leadership positions at P&O Ports North America, Denmark-based APM (Maersk) Terminals, and Sea-Land Service, Inc.

Throughout his career, Mr. Lytle has been affiliated with several associations in the maritime industry, including the Pacific Maritime Association, and the Pacific Merchant Shipping Association, where he was on the Board of Directors. He also has served on the boards of the Steamship Association of Southern California, the Propeller Club of Los Angeles and Long Beach, and the Marine Exchange of Southern California, and was a member of the Executive Committee for the Center for International Trade and Transportation. Currently, he is on the board of the University of Denver's Intermodal Transportation Institute.

At the Connie event, CII's Vice President and Chair of the Scholarship Committee, the Honorable Steve Blust, presented 17 scholarships to students from California State University, Long Beach and the University of Southern California. In addition, organizations that are committed to grooming our future industry leaders were also recognized with scholarships to EXP, formerly known as ITEP, as well as California Maritime Academy.

"Our donors' overwhelming generosity allows CII to honor its education mission and helps encourage fresh talent to continue to pursue a career in our industry," said Mr. Blust.

Acknowledging this tremendous, record-breaking turnout, Mike DiVirgilio said: "This is our biggest Long Beach Connie Awards dinner, and that speaks well to CII, the prestigious Connie Award as well the award recipients. And we have all of you to thank. If not for your generous support, our Connie Award events could not happen."