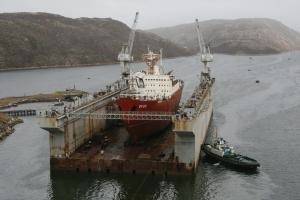 In fact, shipwrights at Nerpa have built a new ship. Only the hull remained from Yauza; the deck erection and equipment was demounted. During the total retrofitting, the ship's living quarters was completed, and up-to-date control systems were installed. The ship has not only changed external appearance but was conversed from a dry cargo vessel into a Project 550M ice-class passenger/cargo ship.

After launching and outfitting works, the ship will pass dockside and state trials to test all onboard systems and equipment. Shipwrights of Nerpa will hand over the renewed ship to the Navy, meeting all standards of Russian Maritime Register and equipped with up-to-date navigation and communication systems.

Thanks to new diesel generators and crane facilities, cargo-handling operations will become easier and faster. Security and communication systems were completely upgraded. After repair and modernization, the ship's service life is expected to be 10 years longer with optional further 10-year extension.

Yauza was laid up for repairs at Nerpa shipyard in 2008. At that time, she had been in service for over 35 years. Through 2.5-year long repair, the ship has passed complete renovation.