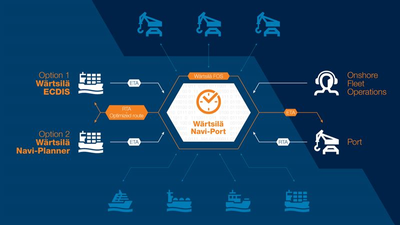 Wärtsilä, together with project partners Carnival Maritime and HVCC Hamburg Vessel Coordination Center (HVCC), announced they have implemented and tested a new solution for just-in-time sailing.

Together, the partners have achieved the exchange of data between ship and shore under real-life conditions, thereby enabling optimal port arrival.

Ships frequently sail faster than necessary in order not to miss valuable berthing slots, only to find themselves having to wait at anchor before the pilot station. This queuing is the result of a lack of relevant data sharing between vessels and their destination ports. The current modus operandi is often inefficient, which in turn can have a negative effect on doing business. The financial impact is considerable, while the unnecessary burning of fuel at higher speeds also adds to the levels of harmful emissions being exhausted into the atmosphere. This project targeted avoidable excesses of speed, on the basis that timing is everything.

Wärtsilä Navi-Port is a middleware which will be hooked up to Wärtsilä’s Fleet Operations Solution (FOS) system. FOS is essentially an online infrastructure designed to enable 360° ship-to-shore reporting and fleet performance management. It combines individual processes that are otherwise separated, to optimize voyage planning, weather routing and fuel consumption, taking into consideration charter party compliance, speed management, as well as the condition of the hull, propeller and engine.

Wärtsilä Navi-Port now also facilitates the exchange of accurate arrival times between ports and ships, enabling vessels to automatically adjust speed to achieve a just-in-time arrival. Dynamic, real-time data sharing improves co-ordination, allowing for modifications to course and speed should conditions at the port change during a voyage. For the ports, the Wärtsilä system is said to provide better and more efficient planning of port and terminal operations.

Wärtsilä Navi-Port is the first commercially available ship-to-port communication platform that has applied the port call message standard as defined by the Sea Traffic Management (STM) validation project. Wärtsilä has been one of the main contributors to the STM developments and trials, where more than 300 vessels have participated, 130 of which have used Wärtsilä navigation systems.

Today, nearly all the activity coordination from the port side happens via an agent, meaning there is a lot of point-to-point interaction. Connecting the port system with the vessel navigation system can automate correspondence and ease handling of all stakeholders involved in a ship’s safe and timely arrival to port.

How does it work?
If port conditions are incompatible with the vessel’s planned time of arrival, the berth scheduler suggests a new Requested Time of Arrival (RTA). The RTA is shared with Wärtsilä FOS and then sent directly to the vessel’s navigation system, along with an optimized, automatically calculated sailing speed. If the RTA is accepted by the Captain, the ship’s speed is automatically adjusted to respond to the new arrival time.

Depending on the specific decision-making process, the information can also be shared with the shipping company’s Fleet Operation Center, so that shore-side personnel can be involved in the approval chain. The changed Estimated Time of Arrival (ETA) is constantly communicated to the port. The ship then arrives to the berth at the allotted time, having saved fuel and having emitted far fewer exhaust emissions.