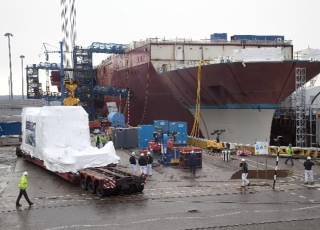 The MT30s are installed as part of a Gas Turbine Alternator (GTA) which also includes an alternator and gas turbine enclosure, weighing a total of 120 tonnes.

Tony Wood, Rolls-Royce, President - Marine said: “The successful installation of the first MT30 marks a significant milestone in the Queen Elizabeth class program. Rolls-Royce has a long and proud history of delivering excellent marine gas turbine technology to the Royal Navy. We are extremely pleased to be part of this program working alongside our many partners in delivering sophisticated power and propulsion systems for these magnificent ships.”

Jim Bennett, Thales’s Power & Propulsion Director for the Aircraft Carrier Alliance, said: "The Power & Propulsion Sub-Alliance is immensely proud of this significant milestone in the QEC project. It has been the culmination of many years of hard work to ensure the timely delivery of this first complete MT30 gas turbine alternator, which along with its twin will deliver around two thirds of the electrical power generated onboard HMS Queen Elizabeth. Congratulations to all involved, this is British engineering at its best!"

Tony Graham, Head of Capital Ships at the Ministry of Defence, said: “The successful achievement of this major milestone has brought the biggest grin to my face since Christmas Day. To have successfully lifted the most powerful engine in the Royal Navy onto the biggest ship ever built for the Royal Navy using the biggest capacity gantry crane in Europe is an important event in the construction of the Queen Elizabeth. Everyone involved should take huge pride in their contribution to this national endeavour.”

The installation involved the lifting of the MT30 gas turbine and associated ancillary equipment - housed in a steel package known as the gas turbine enclosure - onto the ship structure. With the enclosure in place, the large alternator, which is driven by the gas turbine to produce electrical power, was then hoisted into place.