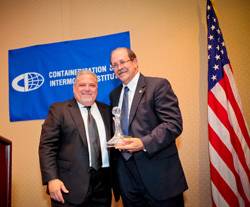 More than 200 turn out to for Port of Long Beach Executive Director Honored by the Containerization & Intermodal Institute.

The Connie Award was presented by the Containerization and Intermodal Institute (CII) to Richard D. Steinke, who will retire this month as executive director of the Port of Long Beach. Mr. Steinke was honored for his leadership role in developing the Port into one of the world's largest container harbors. More than 200 people attended the industry-wide dinner event held on September 21, at the Renaissance Hotel. "Richard Steinke established himself as an indispensable leader of the Port of Long Beach and maritime industry," said Allen Clifford, President of CII. "His hard work and immense contributions will help keep the port among the busiest in the world."

Mr. Steinke led the Port's redevelopment of the former Long Beach Naval Complex, creating one of the nation's largest container cargo terminals. He transitioned the Port, making it both a builder of modern cargo terminals while becoming environmentally efficient. Mr. Steinke also implemented a Green Port Policy that included a successful Clean Trucks Program in collaboration with the Port of Los Angeles. Mr. Steinke's leadership and expertise were instrumental in the completion of other various projects that includes winning approvals for the $1 billion Middle Harbor Redevelopment project and the $950 million Gerald Desmond Bridge Replacement project.  These projects helped create one of the nation's largest container cargo terminals and assured safe access in and out of the port complex.

In accepting his award, Mr. Steinke said: "Containerization came to the Port of Long Beach in the early 1960s, just about the time the institute was forming, and we've been on a fast ride ever since." He continued: "Thank you CII for all you have done to promote and support the business of international trade and intermodal container transportation. I am very proud to receive this Connie. It's a tremendous honor." I share this award with many past and present Harbor Commissioners and Port of Long Beach staff, and our many industry partners, collaborators and stakeholders.


He noted that a special debt of gratitude is owed to the port's customers, marine terminal operators and the workers at the Port of Long Beach. "They have been a key part of our success. They have played a large part in developing innovative technology and practices that brought efficient operations to the Port of Long Beach," said Mr. Steinke.  He said the culture of the Port of Long Beach changed dramatically in 2005, when it adopted the Green Port Policy. "We made a big change in our own administrative culture, and we asked our partners to make big changes as well," he said. "We developed many idealistic goals to protect the environment and cut port-related air pollution."

Those goals could not have been achieved, Mr. Steinke noted, without the willingness of marine terminal operators, trucking companies, vessel operators and many others in the transportation chain to help Long Beach "grow green."   Together, he said, "we have shown the world that it is possible to increase our business and reduce emissions at the same time." With immense appreciation for his staff, Mr. Steinke added. "In my 20-plus years at the Port of Long Beach, I've always felt a true collaborative spirit within our industry. We speak with one voice when it comes to our support for international trade growth, and the need to continue to improve our intermodal networks so that we support additional jobs and economic activity in the future. It's a real pleasure for me to be able to play a role in that collaboration." During his career, Steinke served as the chief spokesman for the U.S. West Coast Collaboration, Chairman of the American Association of Port Authorities and the California Association of Port Authorities.  He also serves as a member of the Red Cross CEO Advisory Committee.

Recipients are honored for innovative spirit in their careers and at their respective companies, as well as for their positive influence on the industries they serve. In addition to the Connie Awards, CII continued its industry education mission by presenting scholarships to students studying logistics. More than a half-million dollars has been given to deserving students through CII since the program began with Crowley Maritime in 1992. Crowley has given very generously to Cal Maritime and Kings Point midshipmen every year since then. This year's Thomas B. Crowley, Sr. Memorial Scholarship Award was awarded to three California Maritime Academy midshipmen: Stephen Luxton, Drew Kerlee and Richard Darwood.

Two awards were designated in memory of Captain Minghung Wei by Barbara and Joe Yeninas, as well as one from the Wei family. Captain Wei sailed for many years with several ocean carriers and came ashore some 40 years ago to become an executive at Evergreen. He left Evergreen as its West Coast president in the early 1980s and joined ITL operations in Long Beach. The two recipients of the Captain Minghung Wei Scholarship were Warren Tang of the Global Logistics Specialist Program at California State University, Long Beach and Ryan Waller of Global Logistics Specialist and Marine Terminal Operations Professional Programs at California State University, Long Beach.