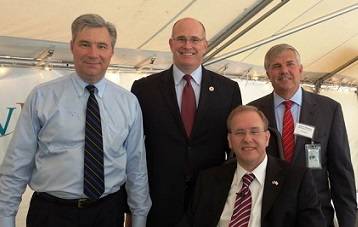 One of the most important components of a healthy economy is modern port infrastructure to feed our maritime transportation system. By investing in waterways, jobs are created, economic competitiveness is improved and prosperity is built for the long term.

At the Port of Providence alone, port-related employment has grown from 800 jobs 15 years ago to 2,400 jobs today.  And at DOT, we’re committed to this continued growth, having invested more than $32 million in TIGER grants to Rhode Island ports to increase their capacity and efficiency.

In addition, DOT has transferred more than 500 acres of federal property at these ports to the state, so that they are able to meet their modernization and expansion needs. The grants and the land transfers represent an opportunity for port growth and a major jump-start to its economy.

Since the passage of MAP-21, DOT has been working to develop a National Freight Policy focused on improving the condition and performance of the national freight network. Our growing economy, and the freight tonnage that comes with it, requires this type of collaboration at every level – federal, state, local, public, and private. It is clear that Rhode Island residents have taken the steps to make this a reality.

Home to one of the first statewide freight advisory group in the nation, the Ocean State has emerged as a leader in transportation planning and sets an example for other states to mirror. It is clear that a forward-thinking maritime agenda starts at the top, and DOT congratulates Governor Lincoln Chafee, Senators Jack Reed and Sheldon Whitehouse, and Congressmen David Cicilline and James Langevin for being strong maritime allies.