Rhine Water Too Low Even for Some Empty Vessels 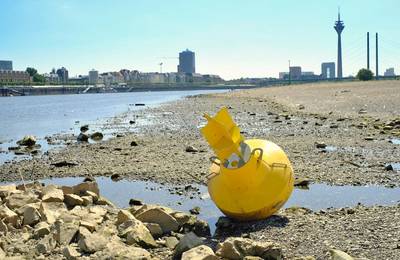 Water levels on Germany's Rhine river are so low that some vessels cannot sail even when empty, a shipping cooperative said on Friday, although long-awaited rain has begun to ease bottlenecks on one of the country's main commercial routes.

Weeks of drought across Europe and beyond have added to supply chain problems as vessels have had to lighten their loads to ensure they can travel along depleted water channels.

"Empty ships can no longer sail in some cases," Roberto Spranzi, director of the DTG shipping cooperative that operates about 100 cargo vessels on the Rhine, said on Friday.

"There are technical and physical reasons for this: the drive is aft, so loading must be done in the forward area so that the ship can lie straight in the water."

Expected rain in the coming days is forecast to increase levels in the Rhine by 50-to-80 centimeters in the coming days, a spokesperson for the Federal Waterways and Shipping Administration said, adding they would have to climb by 1-1.5 meters to reach levels typical for this time of the year.

Water levels at the Kaub reference point WL-KAUB west of Frankfurt were at 35 centimeters on Friday. Levels in the 30-35 cm range are acceptable for shipping, provided cargoes are reduced.

Chemicals giant BASF said on Friday it had so far avoided production cuts as a result of the disruption, and Thyssenkrupp, Europe's second-largest steelmaker, said its raw materials supply was secured.

But energy major Shell said on Thursday it cut production at a German refinery due to low Rhine levels.