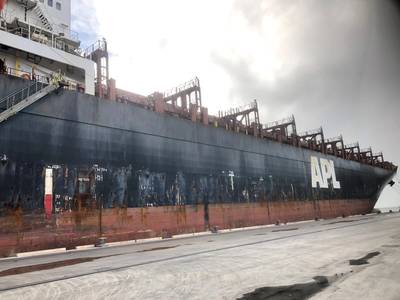 APL England without cargo in the Port of Brisbane, prior to departing for China where the ship will be repaired. (Photo: AMSA)

Singapore-flagged containership APL England, detained in Australia after losing dozens of containers off the country's southeastern coast in May, has been released and is sailing to China for repairs, the Australian Maritime Safety Authority (AMSA) said Friday.

The ship departed the Port of Brisbane without cargo and with a new master after AMSA's inspectors attended the ship and determined it is fit to sail. The ship’s previous master who is facing multiple charges relating to the incident, has left the ship and will be repatriated home, AMSA said.

The ship’s insurer, Steamship Mutual, has committed to pay fines and other amounts up to $22.5 million that are agreed or imposed by a court in relation to AMSA’s costs in responding to the incident, the agency said.

So far, Australian authorities have recovered 15 containers from the 5,510 TEU capacity containership that spilled at least 50 boxes overboard after temporarily losing propulsion while sailing from Ningbo, China to Melbourne. AMSA has directed the shipowner to search for and retrieve the 35 containers that are still missing.

AMSA said the owners and insurer are in the early stages of tendering for a sonar search of about 1,000 square kilometers of water from the Illawarra to Sydney’s southern suburbs where it is believed multiple containers may have sunk.