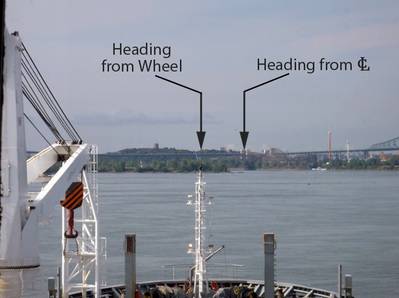 The Transportation Safety Board of Canada (TSB) issues its report on last year's St. Lawrence Seaway grounding of 'BBC Steinhoeft'

In summary: on 31 March 2011 at 0309 Eastern Daylight Time, the downbound vessel BBC Steinhoeft, under the conduct of a pilot, ran aground in the South Shore Canal of the St. Lawrence Seaway downstream of St. Lambert Lock. Seaway traffic remained closed for 10 hours after the grounding until the vessel was refloated by 2 assisting tugs. There were no injuries or pollution as a result of this occurrence.

Findings of the cause of the grounding and contributing factors:

1.    The steering stand of the BBC Steinhoeft was offset from the centreline, and specific and detailed information was not provided to Pilot No. 1 to allow the accurate determination of parallax error.
2.    After Pilot No. 1 ordered the helmsman to steer on a visual reference point, the vessel followed a path that brought it closer than desired to the south bank of the channel.
3.    As the vessel approached the entrance to the narrower section of the channel, it experienced a bank suction effect that caused a sheer to port.
4.    All attempts to counteract the sheer were ineffective in the short time and limited space available, and the vessel ran aground, blocking the channel.