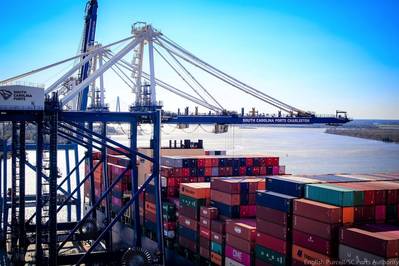 South Carolina Ports reported an all-time container record in March, marking the 13th consecutive month of cargo records at the Port of Charleston.

“As we continue to handle record volumes on our terminals, SC Ports is working alongside our maritime community and logistics partners to navigate the many challenges felt across the entire supply chain,” SC Ports CEO Jim Newsome said. “We are responding to customers’ needs as we make progress on reducing the backlog.”

SC Ports handled 145,415 pier containers — which accounts for containers of any size — in March, up 5% from last year. Thus far in fiscal year 2022, SC Ports has moved 1.19 million pier containers, up nearly 15% from the same period the year prior.

SC Ports said it is responding to the record volumes and ongoing supply chain challenges in real-time with a variety of efforts, such as providing Sunday hours for motor carriers and selective term leasing of the port’s new chassis. SC Ports has also hired more than 150 people in operations and invested more than $2 billion into port infrastructure. The new Hugh K. Leatherman Terminal adds a much-needed berth to the East Coast port market.

At a time when the supply chain is seeing unprecedented cargo volumes, Leatherman Terminal’s capacity is not being fully utilized by USMX member ocean carriers, pending resolution of the ongoing case in front of the NLRB.

“We will continue investing in strategic port infrastructure and deploying creative solutions to ensure fluidity for our customers,” Newsome said. “We are very grateful to our dedicated SC Ports team and the entire maritime and logistics community. Thank you to the men and women working so hard to keep freight moving for the Southeast supply chain.”

SC Ports reported 18,409 cruise passengers in March, which is the highest month thus far in this fiscal year. Cruise operations resumed in late December after a nearly two-year hiatus.