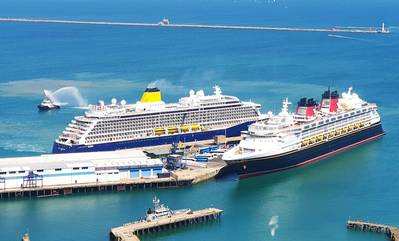 Portland Port’s 2020 cruise season is expected to grow again this year with greater number of cruise calls and passengers.

For more than 10 years this has been the general pattern, with numbers increasing from just three ships in 2000 to the 46 that are expected this year. Along with the 46 cruise ships, they will be bringing more than 80,000 passengers and crew into Dorset and the surrounding area.

The port’s cruise season is much longer this year, with the first ship arriving on the March 9, and the last, on the November 25. Of the 46 ships expected, 10 are inaugural calls, each of which, will receive a hand carved Portland stone plaque to commemorate their first visit to Portland Port.

The first ship to arrive on the 9th March, is a new ship and cruise line for Portland; Hurtigruten’s vessel, MS Fridtjof Nansen. The MS Fridtjof Nansen is the latest addition to their fleet and has a relatively small passenger capacity of 530.

The Norwegian Escape will become the heaviest vessel and have the most passengers on board, of any vessel, to ever visit Portland Port.  She has a passenger capacity of 4,266 and a gross tonnage of 165,157.

Silversea Cruises are sending one of their vessels to Portland Port for the first time this year, with the Silver Whisper due to visit on the July 16.

Celebrity Cruises are also visiting Portland for the first time, with the Celebrity Reflection visiting on the May 14.

Other first-time vessels for the year include the Regal Princess, Pullmantur’s Monarch, Phoenix Reisen’s Amera, the Seven Seas Splendor, the Island Princess and CMV’s Columbus.