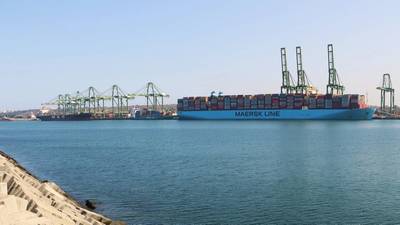 Pic: Ports of Sines and the Algarve Authority

Port of Sines, the first largest artificial port of Portugal, said that its Terminal XXI received, on July 21, the call of “Milan Maersk”, one of the world’s largest container ships, with capacity for 20.568 TEU (20 feet containers).

"This is a sister-ship of “Madrid Maersk” that has been received several times in the recent past, is part of the largest category/class of container ships ever operated in Sines," said a statement from the Ports of Sines and the Algarve Authority.

Property of the Danish giant Maersk, the ship has 399 meters in length and 58.6 meters width. After the operation in Sines, the “Milan Maersk” went to the Far East, sailing to Singapore.

The handling of the largest ships in the world testifies the capacity of the Port of Sines to operate the most modern ships on the market and proves the inclusion of Terminal XXI in the main international maritime chains.

Investments include the extension of the main quay, currently 946 linear metres, to 1,750 meters and a storage area extension from 42 to 60 hectares. Another nine super post-Panamax cranes will be installed and 30 yard vehicles will be acquired.