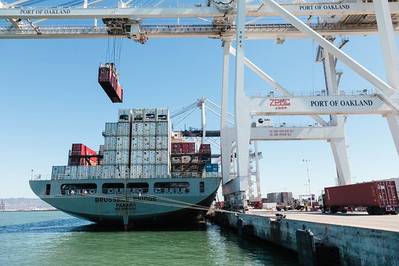 Last month was the busiest in the Port of Oakland’s 92-year history for containerized import cargo.

The Port said it handled the equivalent of 90,598 20-foot import containers in July.  It was the first time ever that Oakland import volume had crossed the 90,000-container threshold in a single month.  The total surpassed the Port’s old monthly record of 87,207 containers set in June 2018.

According to the Port, July import volume was up 7.5 percent from the same period a year ago.  The Port attributed the gain to strong U.S. consumer demand.

“This is the fourth-time import volume has increased in the past five months,” pointed out Port of Oakland Maritime Director John Driscoll.  “This demonstrates the continued strength of the U.S. economy and consumer purchasing power.”

The Port reported good news on the export front, as well.  Export volume jumped 10.2 percent last month over July 2018, the Port said. It was the fifth-straight month of year-over-year gains in export volume.

The July figures come just days after the Trump Administration signaled it may impose new tariffs on Chinese imports.  Those could be implemented starting next month. The Port said it wouldn’t project how new levies might affect Oakland trade volume.  The Port’s total cargo volume for all of 2019 is up 3.1 percent despite a lingering trade war with China.