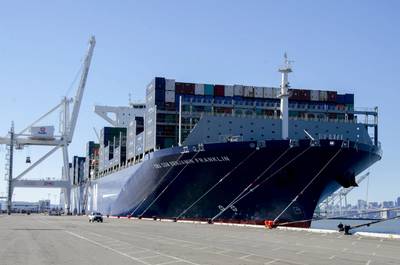 Containerized cargo volume declined at the Port of Oakland in January, the result of spreading supply chain congestion, though the port said it expects greater volume in the coming months when the logjam breaks.

The port said Tuesday that import volume dropped 11.9% last month compared to January 2020. Exports were down 11.3%.

The port attributed cargo declines to factors that included late-arriving ships from Southern California where up to 60 vessels are at anchor awaiting berth space, temporary loss of berth capacity at Oakland’s largest marine terminal where new cranes are being assembled and dwindling vessel space for Oakland exports as ships carry more empty cargo containers back to Asia.

The port labeled declining cargo an anomaly at a time when U.S. importers face increasing consumer demand. It expects container volume to increase in coming months as vessel logjams ease.

“There’s a lot of cargo trapped on ships just waiting to get to here after departing Southern California,” said Port of Oakland Maritime Director Bryan Brandes. “Our concern is getting shipments to our customers as quickly as we can.”

U.S. containerized import volume from Asia is expected to remain strong at least through June. That puts pressure on ports in Los Angeles and Long Beach, where ships stop first before visiting Oakland.

Congestion in Southern California is causing delays of up to a week for Oakland vessel arrivals. As a result, ships reach the port off-schedule and sometimes miss berthing appointments.

Though Oakland imports and exports declined by double digits in January, overall container volume was off just 5.8%. That’s because the port had a 15.6% increase in the shipment of empty containers. Empties are in high demand at Asian ports where they’re needed to transport U.S. import cargo.