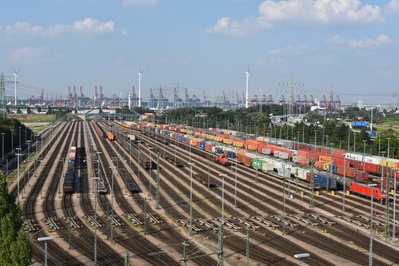 In Germany’s largest universal Port of Hamburg more than 135 million tons of seaborne cargo traffic are cleared annually. A major share of this freight reaches or leaves the port by rail.

today and terms of the various modes of transport on the overland seaport-hinterland routes, then rail is in pole position in Hamburg with 48.2 percent, ahead of trucking with 41.4 percent and inland waterway with 10.2 percent.

“The Port of Hamburg is Europe’s leading rail port. Against the backdrop of overloaded roads and the desire for the most environment-friendly freight transport possible, in the coming years, rail will gain in importance in seaport-hinterland transport. To be well prepared for growth in freight quantities, it is not enough for the ports alone to invest in developing and modernizing, as well as in digitalizing its infrastructure.

Both the rail network and the inland handling terminals have to have both their performance and capacity upgraded for the additional freight volumes,” states Axel Mattern, Joint CEO of Port of Hamburg Marketing - HHM. In his opinion, only with the full cooperation of all players in the transport chain will achievement of better utilization of existing capacity be feasible.

With a freight volume of more than 46 million tons carried annually on the tracks of Hamburg Port Railway, Hamburg is the largest rail-port by a long way. Some twelve percent of all rail freight services in Germany have their origin or destination in the port of Hamburg. In excess of 200 freight trains daily utilize the approximately 300 kilometers of rail network of Hamburg Port Railway and the large number of industrial sidings in the port. More than 5,000 freight railcars have to be reliably positioned everyday either in blocks or individually in the handling terminals and industrial premises. The number of rail transport operators utilizing this widespread rail network has risen in recent years to more than 150 companies. They, with their marketing organisations, provide a dense network of single railcar, shuttle and block train services throughout Germany and Europe. Within the port, companies take on marshaling duties. In all, some 2,100 marketed container-train services to and from Hamburg are on offer to the commercial shippers. This includes more than 200 container train services to destinations in China.

By sea, rail or air – the decision has to be taken frequently between these three modes of transport, when goods have to be carried between China and Europe. Here cost and time play an important role. Without a doubt, airfreight is the fastest means of transport, with import and export freight between Asia and Europe only taking one to two days. Albeit, air freight is also very costly. On the contrary, sea freight between the two continents is very low-priced, but it can take anything up to eight weeks till the goods reach their final destination. The third way, transporting freight by rail, closes the gap between sea and air freight: Trains take two to three weeks between Asia and destinations in Europe and lie between the two where transport costs are concerned.