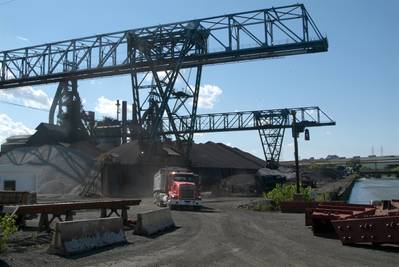 Port of Cleveland budgets for more investments in 2015; reports findings from independent study of Irishtown Bend
The board of the Cleveland-Cuyahoga County Port Authority voted today to accept an annual budget for 2015. The budget includes $20 million in capital investments to enhance maritime operations and sediment management.
Will Friedman, President and CEO, Port of Cleveland, said, “This budget allows the Port to continue investing in our strategic priorities in maritime, sustainability, river renewal, and development finance, while ensuring our overall financial stability.”
The port’s balance sheet also allows it to continue investing in its European liner service, Cleveland-Europe Express (CEE), which was launched in April. The port is expanding CEE service in 2015 to two sailings a month between Antwerp and Cleveland, as announced in September.
“Our experience and discussions with shippers revealed that it is critical we offer more frequent sailings to better serve the needs of those moving containerized freight into global markets,” Friedman said.
The Port of Cleveland also reported findings from its independent study of Irishtown Bend, which examined the conditions of bulkheads and potential for landslides into the Cuyahoga River’s shipping channel. The area is a curving half-mile section of the west riverbank between Columbus Road and the Detroit-Superior Bridge. The Port’s findings:
“With the completion of this study, we finally have a comprehensive technical understanding of the hillside’s condition,” Friedman said. “Now the community can work together to stabilize the hill, safeguard maritime traffic and restore appropriate use of this magnificent and historic site.”
• Will Friedman • Cleveland-Cuyahoga County Port Authority • Port Authority