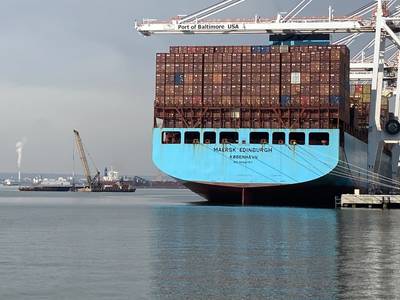 The Helen Delich Bentley Port of Baltimore reports it has again topped its record for most container moves from a single ship.

The new high mark—which counts the number of times an imported container is unloaded from a ship, as well as when an export or empty container is loaded onto a ship—surpasses the previous record of 5,536 moves, also from the Maersk Edinburgh and achieved in August 2020.

“This new record for container moves represents the hard work and dedication of our workers at the Port of Baltimore, and again shows how Maryland is rebounding from the economic impacts of COVID-19,” said Governor Larry Hogan. “Consumer demand and buying confidence is on the upswing, and the industry knows the Port of Baltimore has the team in place to deliver those goods to market.”

The new record was set as the port continues its rebound from a container volume slump felt in the earlier days of the COVID-19 pandemic. In the most recent reporting period in December, containers at the Port of Baltimore were up 12% compared to low points last spring, and up 6% year-over-year compared to December 2019, the third consecutive month for year-over-year gains, the port said.

“E-commerce continues to be a driving factor in our recovery,” said William P. Doyle, executive director of the Maryland Department of Transportation Maryland Port Administration (MDOT MPA). “The Port of Baltimore is surrounded by many of the region’s distribution, fulfillment and sorting centers. With consumers making more online purchases during the pandemic, that’s resulting in strong container gains for us.”

The recent container volume increases include 13 “ad hoc” ship calls since mid-July totaling nearly 18,000 twenty-foot equivalent unit (TEU) containers. Ad hoc ships are vessels that were diverted to Baltimore that were not on a regularly scheduled service.

The Maersk Edinburgh has a capacity of 13,092 TEU. Maersk Line is a member of the 2M shipping alliance with Mediterranean Shipping Co., which also includes a strategic cooperation slot sharing arrangement with another global shipping line, ZIM Line.

Ships such as the Maersk Edinburgh can call on the Port of Baltimore because of infrastructure that accommodates some of the largest vessels in the world. As part of the port’s public-private partnership (P3) with Ports America Chesapeake, construction for a second, 50-foot-deep berth at the Seagirt Marine Terminal is moving forward. The additional berth will allow the port to handle two supersized ships simultaneously. As part of that project, four additional Neo-Panamax cranes are scheduled to arrive in July and will be operational later this year.

“The partnership we forged back in 2009 with Ports America continues to pay dividends with greater capacity and outstanding growth in jobs and revenue,” said MDOT Secretary Greg Slater. “The infrastructure investments we and our partners made at the port over the past decade have proven critical in maintaining Maryland’s supply chain during the pandemic. Looking ahead, we know the investments we’re making now will lay the foundation for the state’s continued economic recovery and vitality.”

The port noted its growing container business also accentuates the need for the Howard Street Tunnel expansion project in Baltimore, which will accommodate double-stacked rail cars to move cargo to and from the port. That project is benefiting from public-private investment between the federal government, Maryland, CSX and others.

The port continues to gain new business, as well as increased business from existing customers. Later this month, the first ship under the Port of Baltimore’s new contract with the Metsa Group of Finland will arrive. Ocean carriers Spliethoff Group and Royal Wagenborg were recently selected to service Metsa Group and Logistec Corp. – this will consolidate all Metsa’s Mid-Atlantic volumes through the Port of Baltimore. The new multiyear contract increases Metsa’s footprint at the port and will bring hundreds of jobs and more than 370,000 tons of pulp used to produce paper and forest products used to produce packaging material. To accommodate the increase, MDOT MPA will use at least three warehousing structures that have been underutilized or vacant for the past five years.