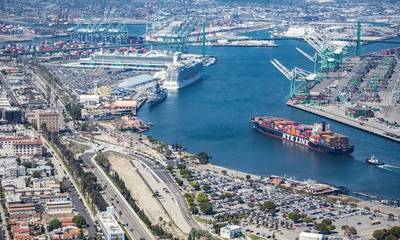 The Port of Los Angeles moved 764,777 Twenty-Foot Equivalent Units (TEUs) in June, the busiest June in the Port’s 112-year history.

The month marked the end of Fiscal Year 2018-19 in which the Port moved 9,688,252 TEUs, a 5.7 percent improvement over the previous fiscal year, a press release from the American  port said.

“Completing the busiest 12-month period in the Port’s history makes me proud of our extraordinary capabilities and grateful to all our stakeholders,” said Port of Los Angeles Executive Director Gene Seroka.

“With container exchange per vessel at record levels, we will continue to enhance and optimize our port complex in the coming months. Creating a universal truck reservation system, moving chassis off terminals and further refining the Port Optimizer™ are top priorities,”Gene added.

Six months into 2019 overall volumes have increased 5.3 percent compared to 2018, when the Port set an all-time cargo record.