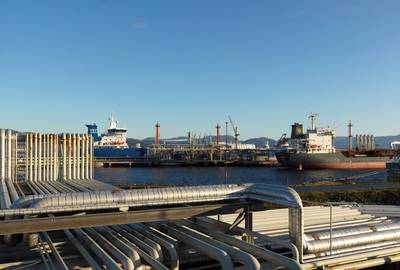 Norwegian police have launched an investigation into a hydrogen gas leak at Statoil's Mongstad refinery in October 2016, the company said on Friday.
Statoil temporarily shut and evacuated its main refinery on Norway's west coast when a rusted pipe socket ruptured. The firm's own investigation found the resulting leak was caused by insufficient maintenance and a poor understanding of risk.
While nobody was injured, the leak could have been fatal if the gas had ignited, Statoil's probe concluded.
"The October 2016 leak is being investigated by police and ... we are cooperating," a company spokeswoman said. She declined to provide to further details.
The police were not immediately available to comment.
Reporting by Nerijus Adomaitis
• Statoil • Statoil's • Norway