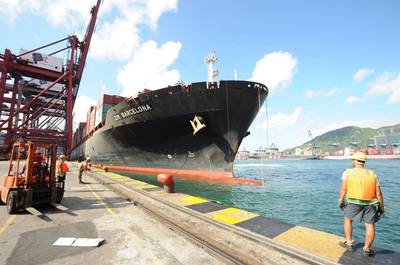 Israel’s Zim Integrated Shipping Services has hired two banks to carry out its initial public offering (IPO) in the US, Bloomberg reported.

Zim Integrated Shipping Services Ltd has hired Bank of America Corp.’s Merrill Lynch unit and Barclays Plc to lead a New York IPO, according to two people with knowledge of the matter, says the report.  The IPO is planned for the first half of 2016.
The shipping company, controlled by billionaire Idan Ofer’s Kenon Holdings Ltd., is planning to list shares by the first half of next year, the people told "Bloomberg", asking not to be identified because the plans aren’t public.
“Zim has been contemplating going public and other financing options since 2007,” Maor Aharoni, a spokesman for the company, was quoted saying. “This strategy has not changed. We have nothing to report at this time and don’t comment on rumors.”
In the summer, Zim completed a huge debt settlement of $3.4 billion in which banks, bondholders and shipping companies that leased vessels to Zim forewent $1.7 billion for a massive 50% haircut.
Parent company Israel Corp. forewent $238 million, injected a further $200 million into Zim, and extended credit and guarantees worth $60 million. After the debt settlement Israel Corp was left with a 32% stake in Zim, which was transferred to Kenon as part of the spin-off.
In 2008, Zim filed a preliminary listing application that would have seen it launch a $500m IPO on the Hong Kong Stock Exchange, but the sale was postponed after Zim fell behind on bond repayments when shipping markets slumped that year. The company revived the plan in 2011 but again the IPO failed to launch.
• Bank of America Corp • Bloomberg • Hong Kong Stock Exchange