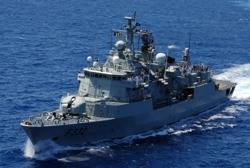 One of Portugal's largest warships, the Vasco de Gama Class frigate NRP Corte Real added its name to the list of ships (EUNAVFOR) operating in the Horn of Africa sea area. The new addition to the fleet will mount counter-piracy operations, with a view to protecting WFP aid shipments to Somalia.

Commissioned into the Portuguese navy in 1990 the Corte Real is no stranger to the Horn of Africa, having previously worked to prevent piracy under the 'OCEAN SHIELD' NATO Operation. With the ability to embark two Lynx helicopters the Portuguese ship's contribution to scouting the seas for piracy will be greatly valued.