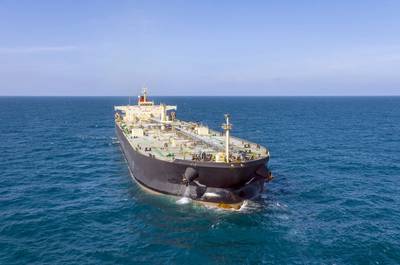 The trading arm of Mexican state oil company Pemex is mulling options to slash the number of fuel cargoes the country imports in May and June as demand plummets because of the coronavirus, three sources close to the talks told Reuters.

Pemex last week declared force majeure over fuel supplies from its trading arm PMI Comercio Internacional after a bottleneck of more than 60 vessels built up outside Mexican ports, waiting to discharge.

But PMI still has not declared force majeure - a contract provision that allows a party to temporarily suspend its obligations due to external circumstances - over its own fuel purchases, which are mostly done through supply contracts with U.S. refining companies.

Not all the contracts signed by PMI permit declaring force majeure in the case of declines in demand, so the company is talking to some suppliers about postponing or canceling cargoes originally planned for May and June delivery, the sources said.

Until the issue is settled, more anchored tankers are likely to accumulate in the weeks to come. That could lead to mounting invoices for demurrage fees, which apply when a cargo is not discharged within the agreed timeframe.

PMI is also in talks with tanker owners to reduce demurrage fees due on vessels that arrived in recent weeks in Mexican ports and are discharging fuel slowly due to the lack of sufficient storage.

"Cargoes that are waiting will not be returned. They will be paid and discharged, but at a slower pace," said one of the sources, a shipbroker working with fuel imports into Mexico. "PMI has so far been paying demurrage fees as well."

Mexico typically relies on gasoline and diesel imports, overwhelmingly from U.S. refiners, to cover most of its national demand. So far this year, the imports - mostly done by Pemex and PMI - constitute slightly more than 70% of Mexican motorists' consumption.

President Andres Manuel Lopez Obrador has insisted on the need to wean the country off the foreign fuel supplies to bolter energy security and refine more at home.

Pemex and PMI did not immediately reply to requests for comment.

The United States shipped 1.17 million barrels per day (bpd) of fuel to Mexico earlier this year, according to the U.S. Energy Information Administration data, before the coronavirus pandemic cratered demand.

Gasoline consumption in Mexico fell 70% through April 22 compared to the beginning of this year due to coronavirus-related mobility restrictions, while diesel consumption declined 35%, according to the country's fuel retail association Onexpo.

PMI buys fuel on behalf of Pemex through different types of contracts, but the vast majority of the purchases are made with U.S. providers using long-term supply agreements for delivery at U.S. Gulf ports, which often include options for declaring force majeure. Pemex then pays to transport the fuel to nearby Mexican ports.

Separate contracts for transporting the fuel are signed by PMI with vessel owners under time-charter agreements or for covering specific spot purchases.

"PMI is having very hard negotiations with tanker owners right now. Demurrage fees will be enormous at the end of the lockdown," another of the sources said.