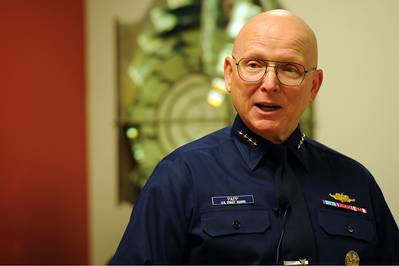 Papp provided an overview of programs and issues of the last four years and also looked ahead to what the Coast Guard may face in the future.

Emphasizing that this year the Coast guard became the first military service to achieve a clean financial audit, Papp remarked that the Coast Guard provided a sound stewardship of taxpayer dollars, an “achievement that required an all hands effort across the service.”

Papp mentioned progress in the Coast guard’s improvement of its sexual assault prevention and response program, citing the commitment of $5 million and 32 military and civilian billets to the effort and the creation of the Special Victims Counsel, made up of specially-trained Coast Guard attorneys dedicated to assisting victims of sexual assault. The sole focus of these attorneys is to represent the victim throughout the entire process of holding a perpetrator accountable, ensuring the victim has an advocate to speak for them. “I have no greater responsibility than to ensure no Coast Guardsman ever has to experience the devastation of sexual assault at the hands of someone they thought was a shipmate,” he said. Papp also emphasized that if a victim believes their case is not being addressed, “they can email me. I’m in the global directory. It will be taken care of.”

The commandant also focused on the acquisition of new assets, such as the christening of the fifth National Security Cutter, the James, this summer, and the newest Fast Response Cutter, the Charles Sexton, being commissioned next week. He said the Coast Guard has also received 148 of the ordered 170 Response Boats-Medium, stating they have been delivered on time as well as on budget.

As a maritime nation and with more than 90 percent of trade being carried in ships, America needs our service, Papp said. Highlighting the “layered security” approach of the U.S. Department of Homeland Security, he focused on the Coast Guard’s partnerships with other DHS agencies to counter threats before they reach U.S. borders.

Papp also took a moment to recognize the service’s recent loss of Boatswains Mate Third Class Travis Obendorf , who was mortally injured during a rescue operation in the Bering Sea and Senior Chief petty Officer Terrell Horne, who was killed by drug traffickers during drug interdiction operations.